If You Still Eat McDonald’s Just Go Kill Yourself Now 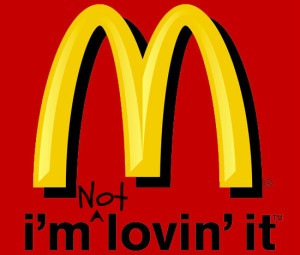 So, by “eat McDonald’s” I mean you regularly patronize the chain restaurant consuming items from multiple parts of the menu. Need more clarification? If you only go there once a month to grab a salad, breakfast beverage or sandwich, or an ice cream sundae, this is not directed at you. I am talking specifically to those of you out there who still order Big Mac meals including fries and a drink. I am talking to you if you eat dinner at McDonald’s more than twice a month. Why should you go kill yourself? Because you are giving money to a company which outright says their food is bad for you and makes you fat. They are killing you. Why spend money when you can simply do it yourself?

When I was a kid, I ate McDonald’s at least twice a week. I usually had it after basketball practice on Thursdays as we scurried over to church for choir rehearsal. And, I sometimes had it on weekends for breakfast before church. I am no stranger to the McDonald’s menu. Trust me. I have eaten my fair share of double quarter pounders with cheese. My poor mother probably wouldn’t have been able to keep me full had she gotten me a normal portion of something healthier.

But, I have since sworn off the lunch and dinner menu. I will sometimes grab a breakfast there but not on the regular. And, I NEVER eat there for dinner. Honestly, I don’t even consider most of the items on the menu to be real food. So, when we are looking for something non-homecooked to eat, it doesn’t even make the list.

McDonald’s has been making the news recently because of their “McResource Line” website which is supposed to only be accessible to employees. On the site, they show a picture of food that bares an uncanny resemblance to a quarter pounder meal on their menu labeled “Unhealthy choice.” Then, they show another meal which includes a salad, sandwich, and glass of water labeled “Healthier choice.” In other words, McDonald’s wants you to go eat at Subway.

Yes, you can get a salad and a glass of water there but they definitely don’t sell sandwiches. And, the ingredients in everything they sell is questionable after watching the documentary Super Size Me. I took a year off from the lunch and dinner menu during my sophomore year in college. When I went back, the food made me physically sick. I can only assume that’s because my body figured out that it was poisonous. Like, you can get fat even by diversifying on that menu.

So why even eat there?

All I have to say is go with McDonald’s on this one. They have nothing to gain by telling you the truth about their non-food food items. If they want their employees to eat elsewhere, it might behoove you to do exactly the same.