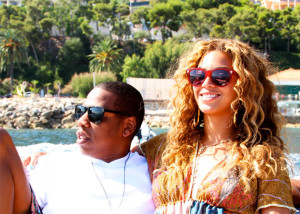 I was planning on writing an album review for Beyoncé’s new self-titled album. Really, I was. But, I’m not sure I’m the right person to review a feminist album. And then there’s the fact that I am a Beyoncé hater.

However, after giving the new album a few listens, I realized something. Beyoncé doesn’t need to prove herself anymore. She can do whatever she wants and the masses eat it up like manna. The same goes for her husband, who recently received 9, count ’em, 9 Grammy nominations, leading the pack this year.

And as a result, Beyoncé and Jay are not held to much of a standard.

While I believe that Bey’s creative moves tend to border on genius, let’s not give the girl too much credit. Bey has the support system in place to release an album without warning. She has a flock of fans that are able to mobilize within seconds for any of her causes. She has the team to do anything she wants, so she does whatever she wants.

Some believe that Bey is single-handedly revolutionizing the music industry (an industry that sorely needs revolutionizing) with her no-warning album release. But this move is only brilliant because no one else did it. Now that it has been done, the luster has already faded. The game hasn’t changed. This one trick pony has just mesmerized most into believing it has.

The album itself is pretty good. There is a definite progression in Beyoncé’s development as an artist. And if anyone worried that the album could be bad, remember that there are umpteen dollars invested in her success, and she can work with all of the top producers in the biz (as she did). Billed as a “feminist” album, she explores multiple facets of womanhood, from the lighthearted to the painful to the downright explicit. And she does it all with her trademark temerity. This album’s success was a foregone conclusion whether she went the feminist route or made a collection of songs about how pretty she is.

I’m not here to critique feminism. Personally, I am a feminist. There are so many unique definitions of feminism out there now, there is no proving whether someone is or is not a feminist. If you say you are a feminist, you’re a feminist as far as I’m concerned. And truthfully, I’m not even here to critique this album (in my opinion, the album has some clear high points and some low points, but to each his – or her – own). I just think that we all need to look ourselves in the mirror and get back in touch with reality.

The position that Jay and Bey hold should elicit us to ask more of them. With the amount of money they make and with every media outlet as their captive audience, they literally have the power to change the world. Instead they hobnob with Obama and take controversial trips to Cuba. Instead they throw a $200,000 party for a one year old. Instead they fall into the same traps of indulgence that most celebrities do.

If you are going to be a feminist, be more than just a feminist in song. In a world where girls and women continue to be oppressed, mistreated, and left defenseless, work for real change. Try to get some legislation passed to help protect rape victims. Instead of giving $37,500 to Wal-Mart shoppers, try to fight for living wages for Wal-Mart employees. Do something that matters beyond growing your publicity portfolio.

And what has Jay-Z ever done to get a pass for that Barneys drama? When racial profiling issues there blew up, Jay-Z took a back seat and let Al Sharpton take the lead. Can you imagine how powerful any type of definitive stance (other than money first, people second) would have been? It would have been legendary. But he can’t let prejudicial policies and the infringement of the rights of blacks mess with his money. Gotta focus on what matters, right?

This is the standard that we hold Jay-Z and Beyoncé to. “Live fabulous, help others just as much as you need to so you don’t look selfish, and let us all envy your life.” But I don’t blame them. These stars only enjoy the fame and status that we bestow upon them. These people and their actions are a result of our society’s praise of excess and disposability. So as long as we don’t ask anything of them, there will never be a reason for them to do much else.

I don’t mean to sound bitter or hateful, so excuse me if I do. I enjoy a Beyoncé tune every once in a while. And Jay-Z’s rise from drug dealer to business mogul is impressive and inspirational. The problem is that there are so many voices trying to be heard, all with important causes, that will never be able to garner anywhere near the attention and backing that whatever haircut or weave Beyoncé decides on for the week can. That is depressing and sad. And it won’t change until we collectively decide that we are worthy of more.