Melissa Harris-Perry and Mitt Romney Are Moving Past it, We Should Too 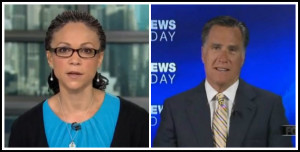 Yesterday , I was called a “useless” n-word. I was instructed to go back to the Amazon (since that’s where n-words are from). And, I was called racist. I am still unsure why this all happened but I can only assume it stemmed from my tweets while watching The Melissa Harris-Perry Show early Sunday morning. I indicated my support for the professor and MSNBC host after she offered an apology to the Romney Family following a segment on last weekend’s show. In the segment, she made a lighthearted reference to Romney’s adopted black grandson Kieran. Immediately, the Republican shit hit the fan faster than a Kim Kardashian selfie on Instagram.

Using the hashtag #IStandWithMHP, I clearly exposed my racism for whatever race of person sent me those hateful words. Clearly.

But, even amidst the disgusting vitriol spewed on social media toward those who “stand with” Melissa Harris-Perry, Governor Mitt Romney went on Fox News Sunday and graciously accepted her apology. Yet, he issued no call for a cease fire on the racial hatred battlegrounds where many folks remained (and still remain). I’m glad he was so classy. If only these Republican leaders could assuage their ilk once the lynch mobs start marching. Harris-Perry offered this apology on Saturday’s show.

It was immensely heartfelt, genuine, and cogent. She articulated her mistake, acknowledged it, and asked for forgiveness. Luckily, Romney was not on the prowl to chuck a pitchfork at her.

Isn’t it funny though how Wallace kept trying to bait Romney into saying something hurtful and combative? He just kept probing Romney hoping he could squeeze out a nugget of hatred for MHP. Romney gave him nothing. He didn’t even flinch.

What Romney didn’t do though was acknowledge the shenanigans for what they were: overblown outrage at a miniscule (almost invisible to the naked human eye) event. He didn’t shame Wallace for hoping for frivolous hate. He didn’t renounce the disgusting epithets that MHP and her followers, viewers, friends, and family have had to endure of the past week. And I so wish he had.

There is something to be said for politicians who abandon faux outrage even for a moment in favor of a real human acknowledgement of whomever they oppose. Mr. Romney came really really close to doing that. He acknowledged MHP’s desire to be forgiven. And he granted her that. But he couldn’t take the courageous step to demand that all the haters attempting to send her to the guillotine have several seats.

It’s okay though. I will remain hopeful for the next time. Maybe his goodwill will bleed onto some of the crazies seeking to burn MHP at the stake.