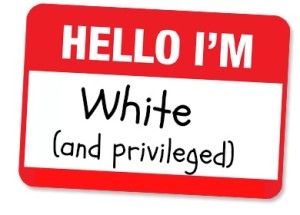 Since starting this blog, I have encountered a range of responses from readers. From the “I’ve been there so thank you for doing what you do” responses to the “Why do you keep talking about race?” comments, I have a broad swath of patrons.

One thing I see my white readers continue to struggle with is the notion of white privilege. Many can’t understand how they are privileged if they aren’t on Bill Gates status. So, I figured it was time to lay it out plainly just to clear up some confusion.

There is a rumor out there that if you aren’t white AND rich then you don’t benefit from white privilege. That couldn’t be further from the truth. White privilege isn’t a system of direct monetary transfer. It is a structural societal process wherein the white identity is the benchmark. Via private enterprise, educational opportunity, environmental barriers, and the US justice system, the majority (white) standard of what is good, meritorious, and “normal” automatically rewards whites for simply fitting the mold.

The justice system is especially blatant about these benefits. This is seen when states like Florida where Ricky Eugene Patterson was sentenced to life in prison for possession of a handful of crack cocaine while US Representative Trey Radel (R) got to return to Congress (with his job intact) and only a year of probation after purchasing 3.5 ounces of powder cocaine from an undercover cop. Patterson recently received a pardon from President Obama commuting his excessively harsh sentence. There was no direct transfer of monetary benefits here but it is clear that life in prison and a felony charge would have monumental economic impacts on someone like Patterson. Rep. Radel received what is akin to a slap on the wrist for a similar offense. And he still gets to collect a paycheck from the American people.

American Capitalism is not blind. Neither is the justice system. The ‘good ol’ boys’ still reign supreme in every facet of public life. That’s nothing short of white privilege.

Truth 2: “Reverse racism” does not preclude one from white privilege

First of all, “reverse racism” is not real. It simply doesn’t exist. I will let Aamer Rahman explain why.

Besides that, having been treated unfairly once or twice (or more times) by racial minorities who resent you because you are in the majority doesn’t negate your white privilege. That time when someone called you a name in a grocery store or you couldn’t get a job because you didn’t speak a certain language (since you believe that was the only thing keeping you from the job) are just instances where you had the chance to not win everything all the time.

Think of it this way, you had enough discretionary income to shop in the grocery store right? And you still got the interview? There are countless racial minorities who, because the way their name sounds or because they don’t have the education you have, don’t even get the opportunity to try their hand at the same experiences you do. And if they are a little perturbed at your privilege, that doesn’t now make you the oppressed.

Truth 3: The benefits of white privilege don’t require intentional use

Some people think that if they don’t mean to be privileged then you can’t acknowledge it. It’s like saying, “Well, I didn’t mean to eat a larger piece of cake than you but I already ate it so you can’t be mad.” You also don’t mean to be rude but you still are.

Generations before you secured your privileged status by gaming the system in your favor. Laws like the Homestead Act of 1862 and the GI Bill of 1944 were early forms of “social welfare” which granted land and education benefits mainly to whites. These legislative acts contributed to and fostered a country wherein whiteness was inherently superior to otherness. You don’t have to intentionally seek benefits. They’re in your DNA.

If you really want to rebuff all the benefits of white privilege, you’ll need to move to a remote community unaffected by modern social norms and American standards of rightness, shirk any vestiges of American culture, assume the lowest possible point of entry into said community, and work for your shelter, food, station, and drinking water without any special or marginal treatment. Just start life from scratch and then we can discuss intent.

Just like racism isn’t solely about one’s individual experiences in public spaces, white privilege also has no direct relation with each and every single white person who lives it. Different white people experience privilege differently. Some experience it at large magnitudes. Others? Not so much. Yet, the system still exists. And, it still works to create seemingly insurmountable obstacles to nonwhites seeking to gain entry into functioning society.

So, arguing that you were ” never a slaveowner” or you “can’t be held responsible” for what your ancestors did ignores the fact that those actions contribute to the privileged system you benefit from today. And if you aren’t actively seeking to remove barriers for nonwhites who seek entry into public life without disrespect, shame, or stigmatization then you are silently agreeing that the system is just.

White privilege is not small enough to fit the minimized generalizations many whites attempt to give it. It is equal in breadth to structural racism and just as (if not more) far-reaching. Let’s stop trying to diminish its impact. Instead, we can work on being honest about a system and process which arbitrarily and subjectively assigns haves and have nots if we really want to see a change.