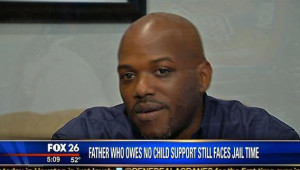 When I first read this story I thought, “This can’t be real.” Sadly, it is. Clifford Hall (pictured) has been sentenced to 180 days (6 months) in jail because he accidentally overpaid his child support and visited his son too much. No kidding.

It’s hard to see how this isn’t a gross miscarriage of justice. This father was adhering to a previous agreement without knowledge that his directives had been modified. After paying arrears, he still managed to be in violation of his child support statutes.

One has to wonder if there is more to this story. Let’s hope this saga clears up before he turns himself into jail in the next few days.

Watch the news story below:

What do you think? Is there more to this story? Could this guy really be going to jail for doing the right thing?