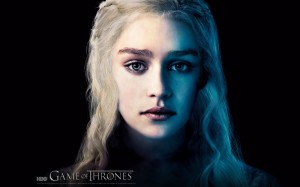 If you haven’t heard, winter is coming. Sadly though, it won’t be here until the dead of spring. Season 4 of Game of Thrones will air on HBO April 6th at 9pm. And all of us GoT addicts are pretty jazzed about it.

I discovered the visual crack cocaine that is Game of Thrones last year. After having heard the hullabaloo from various watchers, I broke down and started watching the book-adapted series from season 1. I. Was. Hooked. The show is akin to a bird’s eye view of Scandal meets medieval times (meets “Zombieland”). There is sex, war, swords, sex, incest, death, dragons, zombies, and…sex.

Now, we have season 4 to look forward to. What happened to the Stark family after the horrifically tragic “Red Wedding” last year? How will evil little Joffrey weasel his way around to screw over his new fiancee? What is Daenerys doing on the throne?

Endless questions ensue. If you haven’t been watching, you’ve got a couple of months to catch up.

Will you be watching? If you haven’t seen it yet, do you plan to start? What questions are you hoping they’ll answer this season?