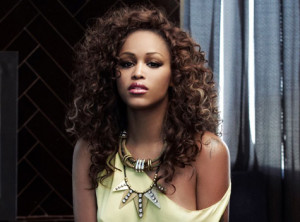 Just when you think she’s done, Eve resurfaces again. It was announced yesterday that the one and only E.V.E. has signed on to star in (and executive produce) a new interracial romantic comedy for ABC. This career move might just be up the rapper’s alley, considering she recently got engaged to a white man, British designer Maximillian Cooper.

Eve (Government name Eve Jeffers) has partnered with producer Aaron Kaplan for the show who specifically had her in mind to star. Of course Eve is not new to acting, starring in the Barbershop movies and her self-titled sitcom Eve (even though no character on that show had that name). The show is still in the early stages (they are still looking for a writer), but the goal is to get in on air during the 2014-15 season.

So why the jump back to TV? Well, her rap resurgence has widely fizzled. Her singles and album Lip Lock failed to chart well, the album peaking at #46 on the Billboard charts. And when you’re an artist that has had so much influence in the rap game, you give it up when you’re about to ruin your legacy.

The real question is, “Is America ready to see Ruff Ryder’s first lady back on TV?” She has marginal name recognition at this point, and she doesn’t have a huge backing in any one consumer group. So who’s going to be checking for this show? That remains to be seen.

I could see Eve pulling this off if she brings her trademark “pitbull in a skirt” persona and the casting is spot-on. But as they say, it’s all in the execution.