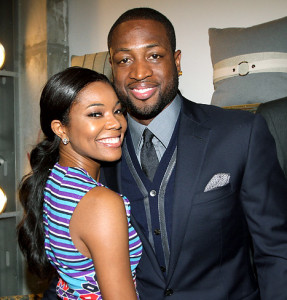 Black women of the world, when are we going to stop sharing responsibility for our men’s philandering? Being Mary Jane actress, Gabrielle Union, is the most recent case of “I’m Partly to Blame Syndrome” after news broke that her long time beau and fiancé, Miami Heat player Dwyane Wade, impregnated his ex-girlfriend, Aja Metoyer, while they were “on break” in early 2013. Truth is, the only person on this earth responsible for Dwyane Wade’s sperm is Dwyane Wade. Union needs to put on some big girl drawls and hold him accountable.

In her recent interview with Glamour, called “My Dos and Don’ts by Gabrielle Union”, Union made it seem like having a busy schedule and spending too much time apart drove Wade into Metoyer’s arms.

“DON’T write off an ex (or get back together) without really thinking it through. When you’re debating whether to go backward or forward, you have to look at the original issue. [When Dwyane and I broke up briefly in 2013], it was because of distance and scheduling. I finished filming the show, then I flew to Vegas right away to start shooting Think Like a Man Too. I couldn’t take time off, and I missed some quality togetherness we desperately needed. “

Union went on to elaborate on her personal relationship choices and the need for “compromise.”

“Over the summer, I reassessed priorities. I’d always wanted an awesome career with back-to-back projects, but I realized I wasn’t willing to sacrifice my relationship for it. Moving forward, I decided my work schedule has to make sense for our family. Bottom line: If an issue’s a deal breaker, it’s a deal breaker. If your relationship isn’t something you’re willing to give up and you can compromise, do so.”

I have a strong feeling she never gave that bit of advice to Wade.

It takes true talent to impregnate someone else while on a brief relationship hold only to convince your long term love interest that her working too much was somehow the cause. Some have said that Union is not blaming herself and that this is just another interview to yawn at. They explain that these may simply be her musings on love and relationships. That would be perfectly normal, expected, and innocuous had she not recently announced an engagement in the same month her surprise future stepson was born.

Some folks want to blame Metoyer for the pregnancy and resulting birth of she and Wade’s healthy little boy. They can miss me with that. Wade chose to sleep with Metoyer. Each of them is old enough to know how baby making works. Sex sometimes makes babies. Having sex without protection turns ‘sometimes’ into ‘often.’

This whole ordeal reminds me of when older black women say things about cheating men like, “If his wife was taking care of him at home, he wouldn’t need to sleep around.” Therein lies the problem. Men don’t NEED to sleep around. Random sex is not a healthy auto-response to being unhappy, unattached, or unfulfilled in a relationship. And, when said sexual randomness results in an unexpected or otherwise unplanned pregnancy, it is simply projecting to assign blame anywhere but with the man issuing the baby juice.

What Union should have said in her interview was, “We were on break but he didn’t need to father a child.” That little sentence would have sufficed in laying the blame squarely where it belonged. It would have rebuked the notion that black women are the beasts of burden available for exploitation. Wade could have taken the precautions necessary to avoid an unexpected pregnancy.  Union has a right to acknowledge that.

The real question is: would Wade have been so forgiving had Union made the same mistake? Would the media? I highly doubt it. Her acquiescing to this sexual double-standard underscores an acceptance of this catawampus social norm.

Conception story aside, a healthy child is certainly a cause for celebration.  Union and Wade seem to be happy now. But, let’s not all pretend like nonchalance is an even-handed response to a public sexual violation of this sort.