Book Review: Before I Forget by Leonard Pitts Jr. 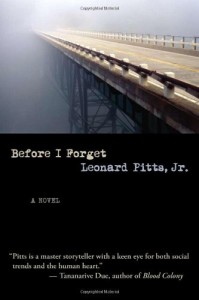 There are a lot of stereotypes that plague black America. There’s the deadbeat dad, the teenage thug, the baby mama, and so many more unflattering representations. But in his 2009 novel Before I Forget , Leonard Pitts Jr. throws those stereotypes in your face, showing that underneath the generalizations there is humanity.

The novel is centered around the family of James Moses Johnson Jr., a famous soul singer from the 70’s. He’s well off from his success. He has fans all around the world. And though his is still in his forties, he is slowly becoming the victim of early onset Alzheimer’s disease.

Faced with the end of his life, James (aka Mo) can finally see how screwed up it is, and he struggles to set things right before he forgets everything and succumbs to his disease. At the top of that list is his son Trey whom he has largely neglected. Trey has aspirations of being a rapper, but he has hardly lived the life “of the streets” that he raps about. And in trying to “experience that life,” he gets arrested for taking part in crime wherein someone is murdered.

But that’s not where the trouble ends. With news that his own father is dying, he sets off on a cross-country road trip with his son. During the trip, the pair come to terms with their own disjointed relationship and grapple with defining manhood for a modern-day black man. Back home, Trey’s mother tries to find happiness with someone else despite still loving Mo, and unbeknownst to Trey, a killer plots to end his life. All of this in the shadow of Mo trying to keep the secret of his own failing mind.

The author has a clear and thoughtful voice, punctuating scenes with music both classic and modern. He takes us from the present all the way back to rural 1940s Mississippi, all the while chronicling how the problems of today are rooted deeply in the past. And the story maintains its compelling pace throughout, a testament to Pitts’ astonishing ability to take achetypical characters and infuse them with immense depth, garnering your complete investment in their outcomes. Though fictional, these characters come across as real people: those you see on the street, on the news, and in your own family. It is through this means that Pitts deeply questions the pillars of society without coming across as preachy.

This poignant tale chronicles a man losing his mind, his life, and his dignity as he learns what is really important to him. It is a truly tragic conundrum, but in that tragedy, Pitts elucidates the value of life and those we have been chosen to live life with. Everything we do influences someone else for the better or for the worse. And just like in real life, each character grew to become who they are due to their choices, circumstances, and shortcomings.

The market for literature targeted at African Americans is dominated by books deemed “urban fiction.” These are books that spin tales of gangsters, illicit trysts, and baby momma drama. They are highly sensationalized, just like the reality shows we see on TV. No disrespect to those writers, but I believe there is more to the black experience than that. And Before I Forget by Leonard Pitts Jr. is a reflection of that belief.