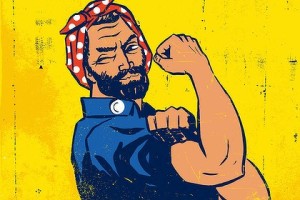 Beyoncé changed my way of thinking when it comes to feminism. But instead of making me want to go publicly burn a bra, she made me doubt the whole movement. Let me explain.

I was listening to Beyoncé’s new album this morning on my way to work, DEEP in that “Flawless” (cause I woke up like this … Bow Down), and the words of Chimamanda Ngozi Adiche hit me a bit differently. As most know, Bey’s song features Chimamanda Ngozi Adiche giving a full explanation of what feminism is. She lays out all of the societal constructs that limit women and their place in the world. In particular, she explains how women are told that they are to be defined by men, either that they are to actively seek marriage or just plain serve a man.

And all of that is true.

But then I measured my own marriage under that microscope, and I saw that a lot of the notions she demonizes present. My wife is subservient. She takes me into account first before she makes decisions. And though we’re not straight out of the 1950’s, we do have some definitive gender roles. That realization made me question myself, my wife, our relationship, and our belief that we are a new millennium, liberal, equality, “new new”, black couple. I mean, how could we be when the Queen Bey herself is advocating to tear down some of the pillars of our relationship?

How could we be so wrong … so misguided?

Well, the underlying notion of feminism is that men and women are equal. One’s genitalia does not dictate what you are capable of or what you should be allowed to do in life. And that goes for the good and the bad. Be you a CEO or a “ho”, do whatever you want as long as it is what you want. Eschew society’s barriers on your life and your thinking. And I agree with all of that. Free love, make love not war, etcetera etcetera.

But how could I agree with all of that and still fall outside of the feminist framework? Then I had my light bulb moment. That was when I saw feminism in a new light. I realized that feminism is a reaction. It is an opposing force to the messages that society imposes on us. And so the solution to the plight of black women is not to make more black women feminists, but to make men womanists.

Black women wouldn’t need to take matters into the own hands and ‘stick it to the man’ if men simply saw black women as their equals. Black women wouldn’t have to stand up for their sexual freedom if men didn’t demonize it. In its own way, feminism itself is also defined by men. And that is where feminism loses.

So what is a womanist you ask? Womanism is “a form of feminism focused especially on the conditions and concerns of black women.” Because too often feminism doesn’t encompass the views of black women.

“Womanist is to feminist as purple is to lavender” -Alice Walker

I am a womanist because, from day one, I have always seen my wife for who she is, not some collection of appendages and social norms she ought to follow. I’ve always seen her as a person more than capable of handling herself and making her own decisions. And if there is ever anything she wants to pursue, I support her. Because I see her as an equal. No relationship should ever change that.

So what’s the moral of the story? Life would be so much better and so much simpler if we all would just be ourselves. The world is bound to always tell us what is wrong and what we should aspire to. That’s just the way we humans operate. However, we don’t have to subscribe to it. And women wouldn’t have to rage against the machine so hard if we stopped being machines in the first place.