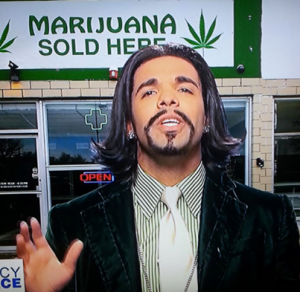 This past Saturday, we were all waiting with bated breath to see what the first black comedienne to join the Saturday Night Live cast since Maya Rudolph left six years ago would do. When we heard about the secret auditions for black women, we were hopeful that SNL had finally gotten the point. Then, when we all stayed up beyond our adult bedtimes to watch Sasheer Zamata on her first episode, we hoped she would be funny. We hoped the new writers would give her quality material to work with. We hoped she wouldn’t play the typical black girl stereotype or the sexed up video girl. And then…she did. She managed to be a boring extra and annoying video girl all night. Meanwhile, singer Drake killed every single skit he was in (especially when he played comedian Katt Williams), proving this whole rap thing is just his cover until he decides to start acting again.

I have been watching SNL for a few years now. The show manages to have these long bouts of un-funniness situated between a few years of laugh-out-loud hilariousness. But, since my faves left like Bill Hader, Fred Armisen, Kristen Wiig, and Jason Sudeikis, I have just been watching in hopes that I’ll be able to laugh at it again. Just a few years before that we had to watch the show hemorrhage funny when Amy Poehler, Tina Fey, and Maya Rudolph exited stage left. So, my relationship with the show has been touch-and-go to say the least.

This Saturday I tuned in hoping that Sasheer Zamata would bring that tenuous relationship to a better place. And, while I had a feeling she would just bring more of the same boring crap, I still hoped she’d make the conscious decision to do something different. Instead, she delivered the equivalent of a black female extra for most of the show. At one point, she sing-talked the words “resolution revolution” while actual funny people acted out the hapless failure they experienced while trying to keep their New Year’s resolutions.

Perhaps the most annoying skit of hers was when she played Rihanna as “B’Lossom” (a take on the hit nineties show Blossom if the lead was Rihanna as opposed to Mayim Bialik). She had so many Rihanna-isms to work with but she reduced it to a puff of smoke and a couple of overt vagina gesticulations. So, needless to say, fail.

Meanwhile, Drake – who was the host and musical guest – killed every skit he performed. He was a super funny A-Rod and a hilarious Lil Wayne playing Steve Urkel in place of Jaleel White. But, his funniest point of the night was when he played Katt Williams as a Colorado weed smoker aficionado.

While I have no interest in ever hearing Drake sing or rap, I would watch him play Katt Williams all day.

Having Drake and Sasheer on the set allowed SNL to finally depict a black family without using drag. And, there were skits that black viewers could actually relate to for once. But, beyond that, Sasheer’s presence was understated, pretentious, at times deliberate, and sadly, forgettable. Let’s hope she steps it up on future episodes.

I think Drake should have an open invitation go forward too. He out-shined all of the newbies.

What did you think about Saturday’s SNL? Is it worth watching again? Will Sasheer meet her high expectations? Sound off in the comments Water Cooler Community!