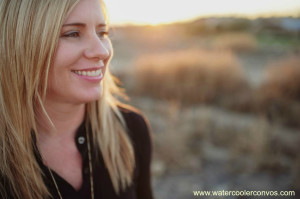 In this second installment of our “Preaching to the Choir” interview series, I sat down with Kristen Howerton from the popular mommy and lifestyle blog Rage Against the Minivan. The accomplished writer, psychotherapist, and educator got to share her life experiences in navigating transracial adoption and normal-hood in the Howerton household.

Howerton has endured a difficult journey to mommyhood. She and her husband have two sons who were adopted transracially – this means that they do not share the same race as their adoptive parents. Her oldest, Jafta, was adopted from the Los Angeles foster care system as an infant. Howerton then had two beautiful girls, India and Karis. She and her husband then completed the years long adoption process for Kembe who came home from Haiti a week after the devastating Port-Au-Prince earthquake in 2010. She is now an awesome mom who shares her lessons learned with others.

It was her blended, “nontraditional” family that made me want to include her in this interview series. Living in Orange County, CA, the predominant family makeup is WASP mom and dad with two and a half children, a picket fence, and a dog. But, when families look a little different, they sometimes experience marginal or exclusionary treatment.

I started the interview by asking Howerton how she would categorize her writing thus far. She simply stated that she writes about “parenting, faith, and race.” I asked Howerton to share one of her most important learnings about parenting.

HOWERTON:  “I think my most important learning is to parent in a way that fits with your own temperament and your own family. There’s no right way to parent. Like a book. There’s no flowchart. You can’t look at someone else online or look at someone and assume the way they do it is the way you should do it. I feel like we have all instinctively, most, have been given what we need to parent, and while we can learn some tips and tricks along the way, we don’t need to change ourselves or morph into a different kind of person to be a good mom.” 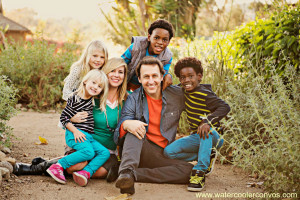 I asked her specifically about the stigmas of transracial adoption and how race factors in to adoption decisions.

HOWERTON: “I think race does matter. We live in a racially charged society and while love may be colorblind, our society is not. I’m coming from that perspective. On the other hand, you have people who think that a child should never be adopted into another race’s home because they’ll never get to see, a black child will never learn from a black adult. It would be better if they were left in the community even if that meant maybe being in a foster home. You know, I don’t really believe that either. You know, I think that if I am really intentional then my kids can have a really secure identity as black men as they grow up. That’s really important to me. Do I think I could do it by myself? No. But I have the humility to know that I’m going to need to outsource and you know, ‘it takes a village’ kind of thing.”

HOWERTON: “So, I understand the critique of transracial adoption. I really do. I’m not offended when people question how that’s going to be for a kid. But at the same time, I understand.”

I fell in love with Kristen Howerton when she posted a picture of her oldest son getting his haircut at a black barber shop over the holidays. Because barber shops are socio-political hubs in the black community, I wanted to specifically ask her about the family’s experience and her decision to make this a regular part of her boys’ lives.

HOWERTON: “Would it be easier for me to just buy some clippers and do it at home? Sure. But that experience for them, that’s one of the times in the month where they’re not in the minority. You know, they are in the majority. Everyone there looks like them. So, I feel like, why wouldn’t I take that opportunity?”

I went on to ask about that minority status. I wanted to explore the complexity of being a blended family and how conversations about race play into her parenting style.

HOWERTON: “I’m just really direct with them. I really want to create an environment where they can talk about that stuff. I check in with them a lot. And, I’ll say ‘You know how are you feeling about…I know you’re the only or one of the only black kids in your class, how are you feeling about that?’ And, I’ll check in and I’ll say ‘hey, do you want more experiences where you’re not going to be the only black child?’ And, to tell you the truth, so far, they don’t hear that much.”

HOWERTON: “We’re gonna do Cub Scouts. We can do it at the church and it’ll be mostly black kids. Or, we can do it at school and that’ll be your friends from school. Right now, it’s like, ‘well, we want to do school because we know those kids.’ But I am going to keep asking them because maybe when they’re teenagers, they’re going to feel differently.”

I love bringing up the words “colorblind” and “postracial.” I asked if colorblindness was a goal or if it was possible at all.

Most people know that adoption is quite difficult. But, when race is involved, I imagine those difficulties become even more complex. I asked about racial barriers in adoption and Howerton gave a brilliant, clear-headed response.

HOWERTON: “I think the biggest racial issue is really identifying your own community and your social circles and your ability to have your child mirrored in society. We use that word ‘mirrorring’ a lot in adoption. What mirroring means is ‘will my sons see themselves reflected back to them?’ Will they know other black people? Will they have mentors who look like them? If you can’t provide mirroring in your life, if you go to the grocery store and they won’t see another person in their race or what have you, then you might want to think about that before you think about adopting. Or, maybe not adopting transracially.”

According to Howerton, mirroring is an important consideration in transracial adoption because a lack of mirroring can sometimes hurt adoptees. The fact that she and her husband parent intentionally means never seeking to overlook race but instead seeking to allow their children to be just who they are.

I wanted to know what she would want others to know about her family.

HOWERTON: “I would want them to know that our family is a real family. Like, we have the same struggles. It’s weird because with transracial adoption, I am always thinking about race but never thinking about race at the same time. I have the same worries and concerns every single day that every other mom does. You know, are we over scheduled? How are we doing in school? Are we eating well? You know? The same parenting stuff. It’s the same child-mother dynamic. Are you being respectful? Are you being honest? You know, how are we getting along? Do we have enough time together? We’re a totally regular family. And then we have this undercurrent of the racial stuff. It’s a factor in our family but it’s not the defining factor of our family.”

Living in Orange County, ‘traditional’ values abound. But, traditional doesn’t always include minorities or mixed families. I wanted to know more about Howerton’s perspective on the word ‘traditional’ and if we should just do away with the term altogether.

ME: Should we keep using the word ‘traditional?’

HOWERTON: “No,  I don’t think we should because if we define ‘traditional’ as being racially matched, I mean, we’re not postracial but we’re definitely moving. Just look at the census. There are way more interracial marriages. Traditional, yeah, I do think that word might be antiquated because the new normal family doesn’t look like all white or all black.”

I let this super mom go after asking her what she plans to do this year. She is hoping for more “down-time,” but we are waiting for a Kristen Howerton book. I vote it be called, “Home with the Howertons.” We’ll see what she thinks.

Next up in the series, writer and all-around awesome person Olivia Cole. If you haven’t seen the first installment with Aamer Rahman, check it out now.