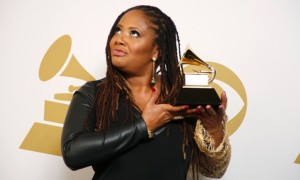 Lalah Hathaway is a vocal beast. This is not news. But even still, I was initially upset that her feature on the Snarky Puppy song “Something” beat out Tamar Braxton’s “Love and War” for Best R&B Performance. But I’ve gotta give it to Ms. Hathaway. She achieved something vocally that I thought was literally impossible.

I listened to the song. It starts off as standard R&B/Jazz fair. There is full band instrumentation. Hathaway croons about love. The band is mean. But still, nothing that hasn’t been done before.

Then she dives into minutes upon minutes of scatting. And she handles it like the queen that she is. It’s powerful. It’s electric. It’s raw. It’s real. But I’d still put her and Tamar neck-and-neck performance-wise.

Then she went and did the impossible. She leaned forward, opened her mouth, and sang a chord. All at once. No backing track. All by herself. She harmonized with herself. The practice is called overtone singing, and is believed to have originated in western Mongolia.

The band laughed with disbelief. Some were simply stunned. And for those that missed it, didn’t believe it, or it thought it was a fluke, she did it again. And again.

Give her the Grammy, a gold star, and a cookie. She deserves it all.

You’ve got to see it and hear it to believe it. Watch the video here: