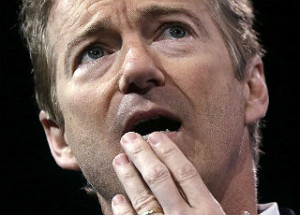 It goes without saying that I am no Senator Rand Paul (R-KY) fan. I was done with him forever when he said that he would probably not support the Civil Rights Act of 1964. Though his dad, former Representative Ron Paul (R-TX), likely seeded some of the anti-black attitudes Rand displays, he is old enough to understand how his actions might rub a few people the wrong way. Yet, he continues to put his foot in his mouth at the expense of black voters.

Most recently, Sen. Paul took the opportunity to kick single moms when they are already facing hostility from the public and Congress. Speaking to the Chamber of Commerce – not to anyone impacted by his racially biased remarks – he gave credence to the notion that welfare benefits should be limited if unwed mothers have more children than he prefers they have.

Think Progress quotes the Senator as saying the following:

“Maybe we have to say ‘enough’s enough, you shouldn’t be having kids after a certain amount…I don’t know how you do all that because then it’s tough to tell a woman with four kids that she’s got a fifth kid we’re not going to give her any more money. But we have to figure out how to get that message through because that is part of the answer.”

No, Rand Paul. You don’t know exactly how to regulate someone else’s reproductive organs but you definitely know that you should have the right to, right?

The article goes on to list some of the consequences of denying benefits to mothers receiving governmental benefits. Aside from more hunger and increased death risk, limiting the welfare payouts for unwed single mothers would only add to the shame mainstream America already inflicts on the social group. Paul seems completely out-of-touch as the article notes that these moms do not vary from other moms in terms of how many live births they have. In actuality, women are having fewer children in general. So, not only are his remarks explosively judgmental, they’re uninformed.

Paul also supported limiting free contraception from employers to preserve moral conviction. He is fine with denying contraception on moral grounds but finds that single moms with multiple children should be punished for raising their families. It must follow that he finds single motherhood of more than four children morally bereft. If these women would simply get married, all of their problems with poverty would be solved. Well, except for the fact that married, working people have no guarantees that they will never face poverty.

The root problem here is a system which is predicated on white superiority and paternalistic, puritanical notions of progress. The institution of marriage – which is still denied to the LGBTQ community – is not a tool of personal economic growth. Nor should it be. If it were, conservatives would have made it available to everyone years ago. Prescribing marriage to correct the ails of poverty is yet another cop-out from those in leadership. They continue to address symptoms instead of root causes.

Why not simply make policy which reduces poverty? Perhaps raising the minimum wage. Perhaps holding corporate entities accountable to their employees. Perhaps paying unemployment benefits to those who need them. There is a veritable pantheon of options here. How about we just try one of those and see what happens?

I know Senator Paul couldn’t care less if folks outside of Kentucky like him or not – that’s apparent in his actions to-date. But, popularity aside, he couldn’t possibly want so many Americans to prefer lice, cockroaches, and root canals over him and his peers.

I could be wrong though.