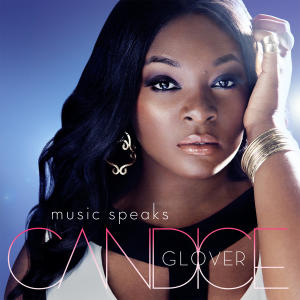 Ever since she was crowned the winner of American Idol last season, Candace Glover has been relatively quiet. Her coronation single “I Am Beautiful” was fairly successful, and her single off of the album “Cried” has peaked at only #23 on the Adult R&B chart. As a result, anyone could guess how her album would come together.

But there shouldn’t have been any doubt. Her tenure on the show was a grand stage to display her versatility and strength as an artist. Her debut album is her chance to swing for the rafters without the constraints of the show. And Music Speaks is a grand slam.

The album itself is a bit difficult to describe because it’s all over the map when it comes to musical styling. There’s a little pop, a little R&B, a little country, a little Gospel, a little jazz, a little reggae, a little blues, and a little Motown all mixed up into one cohesive body of work. It’s neither here nor there; it’s just as Candice wants it to be.

The album opens with the aforementioned lead single “Cried” which is a testament to Glover’s vocal prowess. She also knows how to pace a song, building its intensity to an emotional conclusion.

As Glover’s American Idol judge Randy Jackson always says, if you can sing you can sing anything. “Passenger” is proof positive of that. It’s an urban-country mash-up with thumping bass and drums backing an ethereal piano.

“Forever That Man” is just an incredibly honest love song. The track is dramatic in a compelling way, almost to the point if becoming operatic. And an understated electric guitar provides a nice rock edge.

Upon first listening to the album, I couldn’t believe that “Kiss Me” wasn’t chosen as a single. This acoustic guitar driven mid-tempo song has infectious pop sensibilities without coming across as simple. Quite the contrary, its structure is complex. Keep this one on repeat.

During the American Idol tour, Candice notably highlighted “In The Middle” during her set. And rightfully so. As one of two upbeat songs on the album, the reggae-infused number is a refreshing change of pace. Even though he sped things up here, she didn’t dial back the soul. Like Jennifer Hudson before her, this song makes it clear that she’s not just a “belter” or a “church girl.” She can do it all.

Just as interesting as “In The Middle”, “Coulda Been Me” takes a classic Motown melodic style and lays it on top of a hip hop track. The outcome is summer-y and fresh. Every note Glover sings somehow drips with passion and longing.

To close out the album, Candice reaches back to some old favorites: “Love Song” and “I Am Beautiful”. If you don’t remember “Love Song”, it was one of her many performances from American Idol that made her stand out from the fray. She sings it her just as well, with the longer format allowing her to embody that haunting longing of the song that much better. For “I Am Beautiful”, Glover decided to include an acoustic version of the song here. And that was a great move. She is even more impassioned on this version, putting a personal stamp on the song that seemed to be missing from the more produced version.

In the end, Music Speaks comes across as a very personal album. A number of songs deal with self-worth or unrequited love, and in each instance, Glover feels like she comes from a very genuine place. Her voice is perfection personified, and though she stays in a mid-tempo comfort zone, her range there is so broad that you can’t fault her for playing to her strengths. The songs themselves are like a patchwork quilt of different musical genres; when separate, it looks like they don’t match, but once you put them all together, the sum of their differences makes a beauty you would not expect.

Candice Glover is a true original, and it shows in her dedication to putting out the music she wants. She doesn’t cower to the latest musical trends, and she doesn’t let herself get put into a box. She simply does things her way, unapologetically. And we’re all better for that.