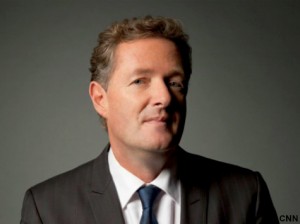 I was done with Piers Morgan years ago. Luckily, it seems like he may no longer be a walking, living annoyance projected in color in coffee shops and living rooms around the world pretty soon. CNN announced that it will put Piers Morgan Live out of its misery in March due to abysmal ratings. All I have to say is “Bye Felicia!”

Morgan has had some good points. He consistently speaks out against gun violence and has even taken on gun rights advocates on his show. Even amidst his random high points, he has had some incredible lows. Morgan recently pissed me completely off when he disrespected Janet Mock – my girlfriend. Mock is a fabulous New York writer whose recent memoir “Redefining Realness” tells the story of her transition out of the mis-gendered stereotypes of trans women and toward being who she was born to be: a trans woman of color and fierce advocate for trans women everywhere.

Morgan attempted to have a professional interview with Mock. The only problem is, he mistook her telling her story in her own way as an opportunity to sensationalize her life.

Instead of discussing her recent memoir, Morgan was fixated on Mock’s genitalia and previous reassignment surgery. He couldn’t seem to get past the notion that Janet Mock was born a woman but she was assigned the gender ‘male’ at birth because of her physical appearance. Trans women don’t live as boys up until the day they have surgery and suddenly wake up as women. They are women whose physical bodies don’t match who they are on the inside. But, that reality was lost on Morgan.

The show’s Twitter team later showed their ignorance when they tweeted about Mock’s relationship with her long time boyfriend – only focusing on Mock’s birth gender assignment – while disrespecting the entirety of her personal story and journey.

How would you feel if you found out the woman you are dating was formerly a man? @JanetMock shares her experience now. #RedefiningRealness

That’s when Mock responded in kind.

He later had Mock back on the show to explain to him why his “infotainment” style didn’t work for Mock.

Luckily, Mock is extremely well-spoken, intentional, and eloquent in her reactions to Morgan’s ignorance. Even after the fifteen minute re-interview, Morgan couldn’t seem to figure out that calling a trans woman “previously a man” completely misses her lived truth.

Because of interviews like this, I am glad to see Piers Morgan go. He is the British equivalent of Don Lemon. Everything he does seems to be an attempt to gain stardom from someone else’s labor. CNN has obviously figured this out. It took two long years but we can finally lift our glasses and exclaim “Bye Felicia!”