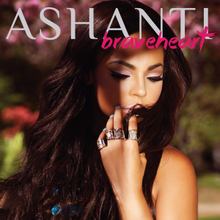 DISCLAIMER: I’m not an Ashanti fan. To be completely honest, she has irked me ever since she was “Always on Time”. I’ve never thought much of her voice. I never got the appeal of her as a package. But I took at listen to this album anyway. I thought that she might bring something new to the table now that she has taken the reigns of her career. Sadly, the results are underwhelming.

She opens the album with bold proclamations about her perseverance and drive to succeed. She sets herself up as someone who is on deck to be better than she ever was. But then “Braveheart” starts, and she does that same lazy note-sliding she’s been doing since the early 2000’s. When will she learn that the technique she is employing is not flattering? All it sounds like is searching for the right note.

This track actually has some potential. As long as Ashanti stays right in the middle of her register, her tone is much more pleasant than grating. I’ve personally decided that Ashanti runs afoul when she attempts to show proficiency as a singer. Contrary to what her statements on a Beyoncé fued allude to, she is much more a part of the Ciara stable of singers. They are weak vocally, but if they utilize their strengths properly, it works.

“Runaway” is a prime example of where Ashanti should stay. This is her lane. The song has an overt urban edge to it, and the vocal acrobatics are left to a minimum. This has a distinctive Mary J. vibe, a la What’s the 411?, and Ashanti has always done scorned well.

Primed and ready for a stripper pole, “Count” comes off like a Rihanna leftover. And that’s in both vocal level of difficulty and lyrical quality. If nothing else, this song proves Ashanti to match Rihanna’s vocal ability … for what it’s worth.

5. Early In The Morning

Ashanti featuring French Montana … just skip it and save your ears the agony. Nuff said.

Here Ashanti attempts her best Janet Jackson impression, seductively singing about those three words. The song is listenable, with its repetitive chorus sticking in your head on the first listen. What is lacks in lyrical content and meaning, it makes up in easily accessible superficiality. It’s just one of those simple songs meant to blast out the speakers on your Jeep.

Ashanti featuring Jeremih … singing about sexual games … just skip it and save your ears the agony. Nuff said.

This track falls right into that hood attitude that Ashanti has worked to cultivate over the years. Once again, she attempts runs that she can’t complete (?!), but at least there is a bit of emotional depth here. There is a little interlude in the middle of the track where Ashanti shares some personal experience and the inspiration for the song. And as she sings behind a more stripped down track, the pleasant notes in her voice are far more evident.

As successful as this track appears to be, it also highlights the downside of going the independent route. Ashanti really could have used someone at a record label to review her work and make sure that some of the inconsistencies and holes are ironed out.

Sonically, this is jarringly similar to Mariah Carey’s “Once Sweet Day.” That being said, I can completely understand why this song was chosen as a single. Her vocals have a bit of strength behind them, and the song has that pop feel that is prevalent on Top 40 radio right now. And to be honest, I’m a bit shocked that the track wasn’t more successful. This could have been her big comeback single. But this disjointed and poorly edited video didn’t help.

I can only imagine that Ashanti was trying to channel somebody like Keyshia Cole or K. Michelle on this one. The problem is that she doesn’t have the grit that those singers to employ to make up for vocal deficiencies. In all seriousness, this should have been axed from the album.

“Don’t Tell Me No” has some electronica/house elements that make for a different sound from the former Murder Inc. songstress. However, if this is an attempt to keep up with the times, she needs to understand that trying something different does not always yield positive results. The track is flat. And not in a “the singer doesn’t distract me from this sick beat” kind of a way.

Ashanti dragged Rick Ross along for this one. And you can just assume the video results. I can honestly say that I never thought I’d see the day where Ashanti of all people would be gyrating and twerking with her ass out. Nevertheless, that day has come. I, for one, have never bought Ashanti as an overtly sexual singer. When she first hit the scene, it was all about her sweetness. And that image has cast a long shadow. If this song and video were an effort to shatter that image, mission accomplished … I guess.

I thought that this would work. Beenie Man starts the song off with Ashanti throwing in some ad-libs. And it seemed to be on track. But then Ashanti really opened up her voice and sounded like she was straining to hit the notes throughout. In comparison to someone like Keyshia Cole that has clearly worked on refining her voice over the years, Ashanti sounds like it’s still 2002 and “Foolish” is at the top of the charts. FAIL.

In its entirety, the album is Ashanti’s very own search for direction. Instead of coming up with something uniquely her, she opted to jock the styles of other successful female singers. This methodology is largely hit or miss. But for me, as someone that has never listened to an Ashanti album in its entirety, this sounds like her best effort to date. There are some moderate winners, and overall, it she doesn’t make any colossal blunders.

It is just astonishing that someone who has managed to eek out a career now spanning 13 years is still so lost. The album is all over the map, never really staying in one place long enough to leave a lasting impression. If nothing else, Braveheart proves that Ashanti still has some life in her. She’d be wise to take note of what worked here and play to her strengths in the future. She just might be able to carve out a corner of the market for herself again.