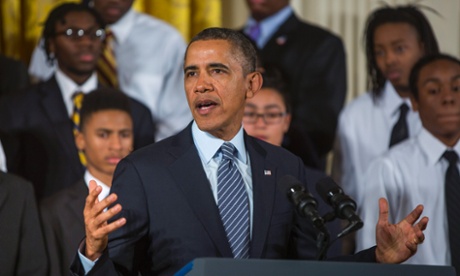 In his second term, President Obama seems a bit more “G’d up”. In other words, the President has released a little bit of the “gangsta” we all have deep inside us. As such, he debuted his new initiative, “My Brother’s Keeper,” last Thursday in the East Room of the White House before a group of young black and brown men, businessmen, investors, and media personalities like Bill O’Reilly. He basically told white America and the world that black boys are important. Sadly, that’s pretty radical.

When President Obama was elected back in 2008, many hoped it would signal a sea change in black politics for the better. Instead, what many discovered was that President Obama, leader of the free world, was just a politician. He was a product of his environment and could not shake the chains thrust upon him by his position. But, he has had some time to not give a crap about all that. I would say this new program is indicative of that growth.

The initiative specifically targets young black boys and seeks to improve their station across several socio-economic strata. Yes, he is a black man. Yes, he is doing something for his community. Now you may sit down black people and move on to the next issue.

The President has previously discussed the Trayvon Martin murder saying he too could have been Trayvon. In launching this initiative, he posed the conversation in a very personal way explaining that he grew up similarly to many of the young black men now struggling in inner cities like Oakland, Los Angeles, Washington DC, and New York City. But, it was specifically personal because of the President’s history as a resident and community organizer in the city of Chicago.

“When I was their age, I was a lot like them. I didn’t have a dad in the house. And, I was angry about it even though I didn’t necessarily realize it at the time. I made bad choices. I got high without always thinking about the harm that it could do. I didn’t always take school as seriously as I should have. I made excuses. Sometimes I sold myself short.”

The young men were surprised to hear him speaking so candidly of feelings that many young people experience at one time or another.

Like his predecessors – Frederick Douglass, Booker T. Washington, and Martin Luther King, Jr. – President Obama believes America is better when these young black men have the opportunity to reach their full potential. But, unlike his presidential predecessors, he is the first sitting President of the United States to dedicate this magnitude of time and money to young black boys. He called this issue “an issue of national importance” which “goes to the heart of why [he] ran for President.”

A total of $350 million have been pledged to creating, maintaining, and growing programs targeted at ameliorating these harsh circumstances for young boys of color.

It is clear that the President means business about this. He called this “cultural backdrop” inherently wrong and acknowledged that many Americans have “accepted it as the norm.”

The President has charted this initiative using a joint task force of community and religious leaders, mayors, business people, and other influential folks who also believe that our young boys are worth investing in. Trayvon Martin’s and Jordan Davis‘ parents were in attendance. So were Magic Johnson and Colin Powell.

The point here is simply that President Obama believes wholeheartedly in our young boys. He is, in essence, declaring a state of emergency when it comes to the dearth of socio-economic progress in many of our communities.

Not that it matters, but I still have to wonder: will the black Anti-Obama Brigade, deadset on denying the President a “Black Card”, finally accept this gesture as an authentication of his inborn right to blackness?

I have grown entirely wary of the assertion that President Obama is not the First Black President simply because he didn’t pass some subjective litmus test for blackness. His skin isn’t dark enough. He was raised by his white mother and grandparents. He never lived in the “hood.”

For those out there suffering from this Steal Other Folks’ Blackness ailment, I have a public service announcement: blackness can’t be measured. And, doing “things” for the black community has never been a code for entry into blackness just like doing negative things to the black community has never resulted in instantaneous revocation of blackness (see: R. Kelly, Kanye West, and Nicki Minaj). Black is a self-identifying factor. Technically, Charlize Theron is black. So, let’s stop this now and allow President Obama to be who he is for a community which deserves – and needs – his leadership.

But, for those bent on measuring this man by his deeds, I would say this deed clearly articulates his vision for the black community. The intent seems rock solid. But, like any government-based program, its application remains to be seen. I won’t debate that yet. For now though, President Obama gets an “A” for effort from me.

You can view the full speech below: