7 Things You Missed From the 2014 Oscars 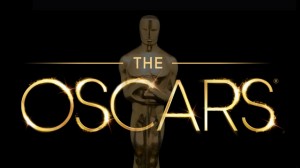 Everytime awards season comes around, people get caught up in the things that make the catchiest headlines. Jennifer Lawrence falls (again) on the red carpet! Lupita Nyong’o slays the red carpet (again) and takes home the Oscar! John Travolta introduces Idina Menzel as “Adele Dazeem”. But just like clockwork, there are always bigger, more substantive stories that always fly under the radar. Lucky for you, we’ve been paying attention and we have compiled the most important stories here for your easy consumption.

The Academy votes very similarly to how the Recording Academy votes for its Grammy winners. First, those that work in the field vote for their top 5 favorites. After the top nominees are chosen, the entire body then gets to vote on who wins. So just like with the Grammys, once you make the nominee list, winning is more about making people think you deserve the award than actually earning it.

How did Gravity win all of the technical awards? Well, the entire movie took place in space so that must have been a huge technological achievement. I’m not sure that the majority or voting actors have any idea what separates that film from another, but they got to help pick the winner anyway. 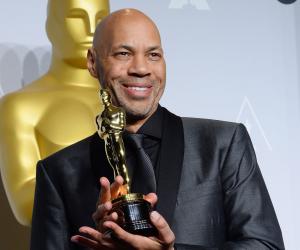 The triumphs of 12 Years a Slave have been celebrated by minority communities and across the globe … literally. But it seems like all of that good couldn’t come without the drama. First there was the visible tension between director Steve McQueen and screenwriter John Ridley. Then there was the unnecessary outrage when Brad Pitt rightfully accepted the award for Best Picture. But the most shocking story to originate from this movie’s orbit is the deplorable comments of John Ridley.

His win and association with 12 Years a Slave had brought back to light an opinion piece he published in Esquire magazine back in 2006. Titled “The Manifesto of Ascendancy for the Modern American Nigger”, the piece is tailor-made to incite outrage. In so may words, he shows his ignorance by basically telling blacks that they need to act more like white people, by leaving the lesser folks behind. He seems to forget that the “white” path to prosperity does not work the same if you are a black person. Methinks he watches too much Fox News and Bill O’Reilly.

3. Barkhad Abdi … famous and in poverty

Barkhad Abdi came out of nowhere to become somewhat of a media darling for his performance in Captain Phillips. So he’s made it now, right? Wrong. The man you see now is a Hollywood prop meant to keep  up appearances. In reality, he was paid $65K from the movie and quit his job shortly after filming to pursue acting full-time. The studio gives him a per diem meal allowance, covers his accommodations, and lets him use the company car for appearances. And every stitch of clothing you see him in has been a rental.

The real tragedy is that now that the Oscars are over and he was not a winner, it’s safe to say that the studio safety net has probably dissolved. Let’s just hope he finds work soon before he becomes another cautionary Hollywood tale.

It seems like the transgender community is the new frontier for minority grievances. This is not to say that this community doesn’t have a right to fight for equity and education for the masses, but everything is not an attack on your dignity. And the Oscars hit both ends of that spectrum. 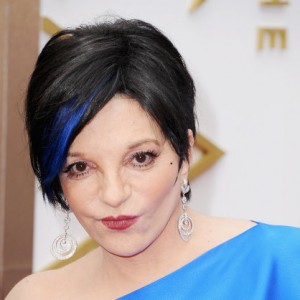 First, Ellen called Liza Minnelli a man. She said that was the best Liza Minnelli impersonator she’d ever seen. Ha ha, he he, ho ho ho. The only problem was that this led people to start calling Ellen DeGeneres “transphobic.” Now was the joke in bad taste? I’d say it was borderline. It definitely made some uncomfortable. However, I think it’s pretty obvious that the joke was not meant to play on transgenderism. On the contrary, it was more of a drag queen joke. Drag queens have been impersonating her for what seems like eons. Ellen wasn’t recreating the wheel here.

At the same time, Jared Leto’s win for playing the transgender character Rayon in Dallas Buyers Club has also earned the ire of the transgender community. In short, they ain’t happy that Hollywood is honoring him for playing a character that is a walking and talking trans-stereotype. In his article, “Don’t Applaud Jared Leto’s Transgender ‘Mammy’”, Steve Friess lays out the problems with awarding a character that, in many respects, is just a modern-day, transgender version of Hattie McDaniel’s Oscar-winning mammy from Gone With The Wind. On the surface, it looks like Hollywood is being inclusive and celebrating everyone with different backgrounds. But underneath, it is actually that much more clear how superficial and hollow the movie crowd can be in truly understanding the minorities it claims to champion.

5. The token-ism of Pharrell Williams 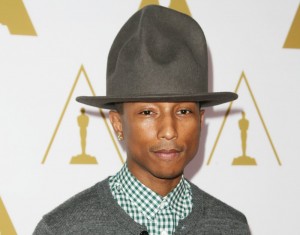 Even though his didn’t take home the statue, attendees seemed most excited for his performance of his Despicable Me 2 hit “Happy”. And I get it; the song is incredibly catchy. It’s also as rudimentary as songs go nowadays. And as I watched him dance around that stage and perform with his barely-there voice, I couldn’t help but see him as a token entertaining the masses. A (very) well-paid token? Sure. But a token just the same.

Then I heard that people are now calling him a genius now?

6. Diversity outside of the nominees 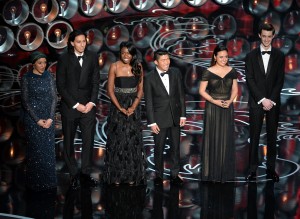 On a positive note, there was a welcome increase in diversity, not just in those nominated or awarded, but also in those that took the stage for other reasons. We saw Kerry Washington, Will Smith, Sidney Poitier, Whoopi Goldberg, Michael B. Jordan, Viola Davis, Jamie Foxx, Samuel L. Jackson, Tyler Perry, and Gabourey Sidibe all present awards, seemingly a sign of the strides minorities have made in film as well as the direction Hollywood is headed. The Academy’s first African-American female president Cheryl Boone Isaacs, another example of minorities breaking barriers, signaled a change in the times.

If that wasn’t enough, the Oscars tried to highlight tomorrow’s talent with its “Team Oscar” winners. The six college students were chosen after students from across the country sent in videos depicting how they will contribute to the future of movies. The winners (Zaineb Abdul-Nabi, Tayo Amos, Nathan Flanagan-Frankl, Jeanpaul Isaacs, Bryson Kemp, and Mackenna Millet) looked like a Coca-Cola “I’d Like to Teach the World to Sing (In Perfect Harmony)” commercial. And while that type of diversity may come off as a bit forced, kudos for the effort. All of the winning videos can be seen here.

7. The “Matthew Effect” and Lack of Nominee Diversity

On the other hand, let’s not give the Academy a pass either. Yeah, 12 Years a Slave took home some prestigious trophies. But let’s be honest. Like we just witnessed at the Grammys, this is still a white man’s industry and a white man’s award show. This is for a number of reasons, but they are all easy to understand.

The easiest and most obvious reason why the entire affair is catered to whites is simple demographics. The LA Times recently highlighted the racial and gender makeup of the Academy which votes for the winners. And, UCLA professor Khaled A. Beydoun distilled the findings in a powerful tweet. 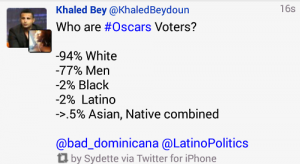 In addition, white folks have the “Matthew Effect” working in their favor. What is that exactly? It’s pulled from the Bible where Jesus says “For to everyone who has, more will be given and he will grow rich.” In effect, Hollywood awards its darlings. And as they get awarded, their star grows … leading to a higher likelihood of more awards. It’s much harder for black actors to get in on this Old Boys’ Network of recognition.

For better or worse, that was the 2014 Oscars. Let’s see if the positive trends will continue next year.

Was there anything else that has been flying under the radar? Share your thoughts in the comments section below!