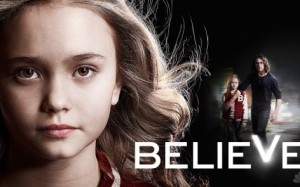 Believe comes from a very strong pedigree. The incomparable J.J. Abrams is executive producing. Alfonso Cuarón, Oscar-winning director for Gravity, directs. The show is surrounded by hype, and with its March 10th premiere, it was time to prove it was all worth it.

If you happened to miss the premiere, you can watch it here.

At first glance, the show has the feel of Tim Kring’s Heroes. There is a supernatural element. Much is shrouded in mystery. Symbolism is just a smidge below heavy-handed. There is the urgency of the fate of the world.

But Believe really is much more reminiscent of another Tim Kring television show, Touch. In both cases, the fate of the world seems to rest on the abilities of a child. In both cases, a black man takes the lead in saving the child. In both cases, a nefarious organization with seemingly limitless power can’t seem the overcome the ingenuity and sheer fortitude of one ill-equipped man. And I’m not sure if that is a good or bad thing.

The show does have a lot going for it. The setup is tailor-made for some strong and entertaining episodes. There is a potential for a threat to rise from any angle at any time. And the connection that the protector and child are unaware of {SPOILER ALERT! father and daughter} makes the relationship that they stand to build together that much more special.

Still, the premiere doesn’t really deliver like it needs to. The best of television pilots are able to establish the characters and the story to come with complete clarity, giving watchers a good incentive to come back. Believe didn’t accomplish that. We get a bit about the characters and we can imagine what form their story may take, but there are no assurances. The series would have been much better served with a two-hour premiere so that we could get a better feel for what the series will be. Instead we are left guessing.

Clearly, NBC hoped that stacking this show behind The Voice would give it a lot of eyeballs, and it did, pulling in 10.6 million viewers with 2.7 in the adults 18-49 demo. However, the gamble is whether or not it will keep the bulk of its viewers with its move to Sunday where is competes with The Walking Dead, Resurrection, The Good Wife, and Cosmos: A Spacetime Odyssey. That’s a lot of stiff competition.

There is a bright spot though. Where the pilot gave us a quick view into this world, the preview for this Sunday’s new episode looks incredibly promising. Watch it below.

Will you be watching? Did you find the show intriguing or confusing? Share your thoughts in the comments section below!