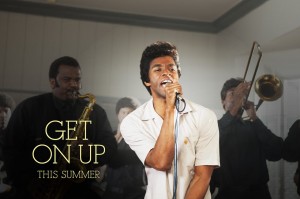 The “King of Soul” is finally getting the cinematic treatment he earned. Get On Up, the forthcoming movie from Universal Pictures, continues the black cinema explosion with the telling of James Brown’s life story.

Chadwick Boseman , best known for his role as Jackie Robinson in 42, takes center stage here as the titular King of Soul. And if you feel some kinda way about him getting the chance to play two black icons in one lifetime, have no fear. The trailer below shows that he is more than equipped for the role.

A lot of people can do a good James Brown impression, but actually bringing the legend to life is a different undertaking altogether. Brown had a perpetual anger brewing just beneath the surface. That takes nuance. It takes a physical transformation. And it takes some impeccable dance moves.

A chronicle of James Brown’s rise from extreme poverty to become one of the most influential musicians in history.

So will this be the next What’s Love Got to Do With It?, the gold standard for music icon biopics? Weigh in with your opinion in the comments section below!