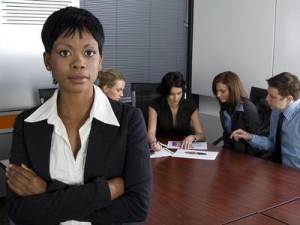 There are a few definitions of cooptation. The word itself can refer to one individual being assimilated into a group or body of individuals. But, typically, the word is used to denote the process by which one individual or entity assumes the work or intellectual output of another as their own. Corporate America is a cooptation machine, which is one of the many reasons I left it for good.

Everyone has had to deal with being coopted at some point in their lives. Whether it was that person in high school who copied over your shoulder in math class or the “friend” who only wanted to work with you on projects because your grades were better than hers, we all have our experience with being used to further someone else. What most people learn the hard way is that this doesn’t stop after high school or college. In fact, it gets worse. In Corporate America, there will always be someone there attempting to benefit from your hard work. Sadly though, there really aren’t many barriers or consequences to them doing so.

At my first job, I was coopted so often that I grew to expect it. In the first four months of my employment there, I became sick with E coli Meningitis. I had been working feverishly for the two months that I was there and healthy. But, when I was hospitalized and receiving spinal taps on a weekly basis to try and replenish the spinal fluids the disease had stolen from me, my coworkers were working just as diligently to enhance their station at my expense.

An intern took credit for a spreadsheet I created to simplify the process of budget planning. And, my direct report and peer took credit for a report I created to tally workload hours. When I came back, my manager was under the impression that everything I had done immediately preceding my hospitalization was created by others. Not only that, she expected me to thank them for it.

I had to contend with the fact that my commitment was in question since I had been out with meningitis. I mean, if I were really serious about my work, I would have been there presenting it myself, right? My counterparts were just trying to help me right?

One especially vile character actually received an award for all of her efforts to “back me up” while I was out. The most enraging aspect of all this cooptation was that they had done such a piss poor job that my work was botched for an entire year following all their “help.”

Most seasoned professionals won’t find these accounts at all surprising. I, as a young black woman, was especially primed for cooptation. Why? Well, because there are already preconceived notions that black people don’t work as hard as their Asian or Latino counterparts. And we are certainly deemed inferior to whites. My race and gender made it very easy for my white counterparts to convince the higher-ups – also whites – that they had done the work which belonged to me. Me stating that it was actually mine just made me look unappreciative, ungrateful, and suspicious.

My race and gender undermined my salaried position so much that I may as well had been a temporary employee. Something is truly wrong when an intern’s word is taken more seriously than a salaried employee.

I remember once working on a project with a team from around the campus. One guy suggested we use a formula to calculate the optimum staffing levels for the hotels. After I had done all the work and boxed it up neatly for him, he took it to a VP and presented it without me. My manager was livid. While she never really defended me against others on her team seeking to steal rights to work they had never done and could never do, she had absolutely no tolerance for anyone outside of our team doing the same. She wanted to make her team – and by proxy, herself – look better. So, she pounced on the male counterpart from across campus. But the damage had already been done. He looked like a superstar for work I had done, meanwhile my boss was seething since she didn’t get a little bit of the shine for herself.

Luckily, after leaving that job, I never had to worry about being coopted again. My subsequent managers were great about giving me credit when it was due. But, I saw it happen on other teams. I saw the same looks of disappointment on the faces of my friends and coworkers who often felt like they had produced high quality work for naught. Initially proud of their efforts and contributions, they were left feeling exploited, used.

Combine the exploitation with unrealistic work hours, unlivable wages, and hostile working environments, and it’s no wonder that Americans boast ungodly levels of obesity, hypertension, depression, stress, and other environmentally induced ailments. I am glad I weaned myself of the corporate malaise. I just wish I had the power and authority to help liberate everyone – especially black women – still stuck there.