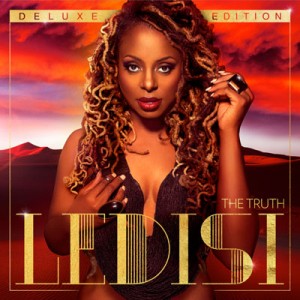 Ledisi’s The Truth is the album that you never thought you’d want to buy but really should. Just one look at the cover, and you can tell something has changed. While she’s got a new look and attitude, her trademark thankfully voice remains the same.

This body of work truly comes as a shock. You could relate it to Tamar Braxton’s Love and War album, labeling is The Truth as it’s more mature auntie. Or you could say this is what Chrisette Michele might grow into in about 10 years. It’s a fusion of soul, modern pop, and thumping basslines that truly has no comparison on the market. It’s a throwback to the heyday of neo-soul when artists like Musiq Soulchild and Angie Stone could make popular tunes with depth that reaches a diverse audience.

Opening in the album is the lead single “I Blame You”. Ledisi clearly means for this song to be a declaration that she is a new woman and everybody best get in line. She is confident, joyful, and breezy all at once as she proclaims the profound power that love has had on her. Just look at at the video below. That says everything that needs to be said.

From there, the standout tracks keep coming. On “That Good Good”, Ledisi exudes sex appeal … tastefully. The reggae undercurrent doesn’t hurt either. This is one to blast from your speakers in your Jeep. “Lose Control” slows things down for the grown and sexy, and Ledisi playfully flips from full voice to flighty. The effect is sensual and a reminder of a time when R. Kelly’s “You Remind Me” topped the charts.

However, the clear standout track of the album is the title track, “The Truth”. Ledisi opens up like never before, singing with emotion an clarity about facing the realities of a relationship. Her vocal delivery is impeccable, and the vintage Motown track is like jumping into a time machine and landing squarely at Hitsville U.S.A. in the 60’s. She starts preaching like Shirley Brown on “Woman to Woman” and even takes it to church a little bit. 5 stars.

Of course there are songs that don’t quite hit the mark like those previously mentioned. “Like This”, though it has the “feel good” aura, loses steam as it goes into the second half of the song. “Can’t Help Who You Love” has a great message, but the follow through leaves something to be desired. And “88 Boxes” comes from a deeply emotional place, but the simplicity of it all comes off more as unpolished than raw.

Still, the album as a whole is a winner. Ledisi more than proves her vocal prowess, and there is no one else out there making music like this that is both sophisticated and sexy. It is always great to see an artist come into their own and produce something that is so true to self, casting aside all of the pressures to conform or target radio spins. That is when real music is made. That is the mark if a true artist.

And so, the album is very aptly named. It is nothing short of the truth.

Buy the album on iTunes or Amazon!