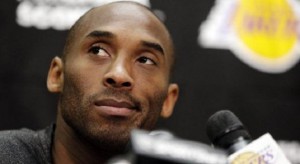 I have never been keen on Los Angeles Lakers star Kobe Bryant. His smug attitude and arrogance about his talent negated – to me – what could have been a beautiful partnership with the black community which has so consistently revered him. And now, his comments and apathy about the Trayvon Martin case have made it all too clear that he is not checking for black people in America.

In a recent interview with Ben McGrath for the New Yorker, Bryant spoke about a host of issues facing him as he looks toward the end of his impressive b-ball career. But, the comments I took the most issue with were those depicting his ambivalence about his membership in the African-American community. This, according to Colorlines, was in reaction to a photo of the Miami Heat basketball team pictured in hoodies to stand in solidarity with Trayvon Martin.

“I won’t react to something just because I’m supposed to, because I’m an African-American,” he said. “That argument doesn’t make any sense to me. So we want to advance as a society and a culture, but, say, if something happens to an African-American we immediately come to his defense? Yet you want to talk about how far we’ve progressed as a society? Well, we’ve progressed as a society, then don’t jump to somebody’s defense just because they’re African-American. You sit and you listen to the facts just like you would in any other situation, right? So I won’t assert myself.”

In other words, Bryant wants to be colorblind. It’s a sad thing when people of color are conditioned to believe that their color means nothing in a country so deeply embroiled in racial animus. While Bryant grew up overseas, speaks several languages, and never lived the life Trayvon Martin did, he should still have the empathy to understand that his current locale of citizenship made Martin’s predicament possible – not Trayvon. Attempting to “listen to the facts” ignores the historical structures responsible for the conditions facing youngsters who look just like Bryant.

What is most disappointing about Bryant’s comments is the simple fact that young black men represent – arguably – his strongest, consistently loyal fanbase. I can’t count the number of times, as a young athlete, I interacted with young boys (and girls) who idolized the teen phenom. They knew every stat, who he was playing next, when he’d be in town, and how likely he was to make a particular facial expression after swishing a jump shot. These kids are the ones Bryant thinks we shouldn’t be supporting “just because they’re African American.”

His class privilege has divorced him from the negative impacts of white privilege. I assure you this is no aberration or anomaly. Having been in his presence on several occasions – both professionally and personally – he is downright unapproachable, callous, and brisk in person. He literally avoids black people who approach him. So, he is obviously failing at not “assert[ing]” himself.

I theorize that this was actually Bryant’s nicer way of saying, “I am tired of black people thinking I am one of them. I’m not.” I say we just keep it real here. When Bryant was accused of adultery, it was overwhelmingly black people jumping to his aid. Maybe it’s time we stop supporting these athletes just because they are black – not the other way around.

And, using Trayvon Martin’s tragic death as social commentary in intraracial and cross-class relations is cheap. He get’s no passes from me – no pun intended. And, his consistently bad attitude should speak volumes about his intentions when it comes to the black community.