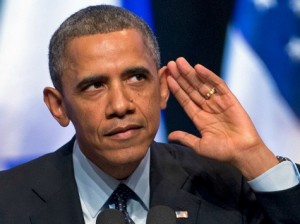 Can you hear him now?

President Obama is – in some ways – eerily similar to the Los Angeles Lakers. He’s always the odds on favorite. The deck is stacked in his favor. And the second you think you’ve got him beaten, he Robert Horry’s the winning shot at the bell (see: 2002 NBA Western Conference Finals). And that loss is so painful that losers try to imagine it away. When it comes to the Affordable Care Act (ACA) – or what he affectionately calls ‘Obamacare’ – this is exactly what he has done to his conservative opponents and naysayers. And they are not too fond of it.

It was reported this week that the ACA enrollees have crossed the 7 million threshold, the original goal President Obama set for the law. What does that mean? It means the plan is now completely financially viable. It means that all of the misinformation conservatives pushed on the country was for naught. It means Obama wins … again.

Here he was yesterday giving his victory lap.

But just because he won does not mean that the GOP will admit it – a point he made clear in his speech. This isn’t an election where the loser concedes. This is politics where spin is king.

Immediately after the news was announced, the political right went into a frenzy. “Obamacare Truthers” emerged, claiming that the news was either a lie or the health care law was a secret plot to destroy America. Yesterday, Senators Graham (R-SC) and Barasso (R-WY) both blamed “magic” or “cooking the books” to explain how the ACA had done so well. Yes, these are sitting senators. Like time and time before, they’ve resorted to conspiracy theories to wish away their loss and the American peoples’ endorsement of Obamacare.

Steve Benen sums it up well at MSNBC.

“The unemployment numbers haven’t been manipulated; there was no 2012 conspiracy to “skew” campaign polls; the White House did not use the IRS to “target” Tea Partiers; there was no cover-up on the attack in Benghazi; Bigfoot isn’t real; and about 7 million American consumers signed up for health insurance through exchanges during the open-enrollment period. Reality does not depend on your satisfaction to be true.”

What is most unfortunate about these new developments is that – for low-information voters – the conservative, Republican narrative may still take center-stage rather than the facts. For folks who only watch Fox News – who ran with this conspiracy story yesterday – they may actually believe the idea that President Obama is somehow lying about the statistics the White House has presented as fact.

This type of politicking is extremely dangerous because it takes advantage of voters who trust their congressional representatives in the Senate and House to be logical, level-headed, and honest. And sadly, these – often single-issue – voters carry a great deal of weight in elections.

So what do the over 7 million people enrolled under Obamacare have to say? Will these enrollments and their assumed happiness with medical care translate to votes for Democrats? That remains to be seen.

But let’s not let this accomplishment go by without acknowledging the gravity of this moment. The Democrats have finally completed the health care overhaul they have been working towards for over a decade. It is solvent. And for now, all President Obama is saying is “Can you hear me now?” Hopefully, with the immense success of the bill, the answer will be, “Yes Mr. President. We hear you now – loud and clear.”