The Blueprint for Black Success in Entertainment 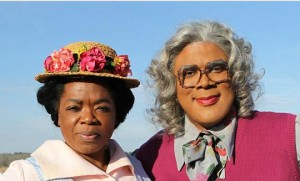 By golly, we’re finally figuring it out. After all of these years, we are finally picking up on the tactics of other racial groups and making things happen for ourselves. Not universally, mind you, but in the field of entertainment, blacks are finally supporting each other in ways that are broadening our potential and our bank accounts. Black Hollywood is carving out a space for itself in the larger body of entertainment. Awards aside, black folk are kicking ass and taking names right now. Will Smith continues to be 1/2 of a power couple, proving that you can have career longevity and maintain a marriage (let’s just ignore the rumors for now). Jay-Z is runnin’ thangs, earning Grammys and raking in those big business bucks. Queen Latifah was Oscar nominated and now has a popular talk show, even after her first talk show was cancelled. What is the common denominator here? Say it with me class: They were all popular 90’s rappers.

Still, the difference between a Jay-Z and a Nas is the foresight to branch out. Fame is fleeting. The trick is to find ways to drag it out for as long as possible. Jay-Z still makes rap albums … for fun. Queen Latifah still records albums … jazz albums. Will Smith still has his hand in music … for his kids. You’ve got to keep changing and remain relevant in an industry that is constantly evolving. That’s hard work. But the one way you can make is a bit easier is to invest in your own community. And finally, that is happening both in front of and behind the camera.

Will and Jada were a major force behind the forthcoming Annie movie which is serving as a starring vehicle for Quvenzhané Wallis of Beasts of the Southern Wild fame. They also executive produce the recently renewed Queen Latifah talk show. Best Man Holiday, written and directed by Malcolm Lee, has achieved crossover success; so much so that Hollywood is clamoring for another sequel. Blacks are taking their successes and multiplying them, with great dividends to be shared by all. It all seems so simple.

To be honest, I’m cheating a bit here. This notion isn’t entirely new. Black movies and record companies have been around seemingly since we finally got that freedom. The 90’s and early 2000’s saw a pre-renaissance of black film where you kept seeing the same folks in movies and shows with one another, just switching the roles around (think Morris Chestnut and Gabrielle Union). But things are different now. And the ugly, dirty, little secret is that it is all due to one man: Tyler Perry. Don’t worry. This isn’t a Tyler Perry fanboy piece. I won’t go on and on about how he did everything right and anyone who doesn’t like it is just a hater. I know better than that.

However, if success is the goal, he is the one to look to. Tyler Perry made our black dollars count. He showed big business that we support projects we care about and deem important. Perry somehow made white folks feel okay about going to see a movie with a black man dressed in drag as an old black woman, cleaning up drugs and gangsters off the street. And he made me feel okay about sitting next to them in the theater and laughing alongside them, the sheer lunacy of it all making the prospect of prejudice or racial judgement an impossibility for an hour or two.

What will really blow your mind though is how even Tyler Perry is engaged in the recycling of dollars into the black community. Everyone knows that his films have been a great launching pad for new black faces. And when he built his own studio, he opened the doors for blacks behind the scenes too. But the truly novel development has been his television business, which is now tied to Oprah’s OWN network. The addition of his shows has helped to buoy the struggling network. The second season finale of his soap-drama The Haves and The Have Nots scored record ratings. And as the network stands to enjoy more and more success, they have the freedom to greenlight more projects such as the recently announced TV movie “My Name is Love: The Darlene Love Story” starring Toni Braxton. This success also bolsters the resumes of the actors, from recent Ride Along star Tika Sumpter to Oscar darling Octavia Spencer. See ya’ll … it works.

You may not like Madea, but you have to admit that those Madea dollars are going a long way to create a space for blacks in Hollywood. You may think Perry is being a Mammy, but that Mammy has Hollywood by the throat. You may not like the means, but you can’t argue with the ends. You don’t have to like it, but it works. And the principle of keeping our dollars within our community is the key to longevity.