‘Captain America: The Winter Soldier’ is Best for Non-Comic Fans 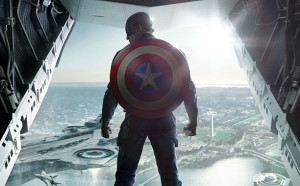 Captain America: The Winter Soldier is an absolutely stellar movie. And even though the comic book stan community has come to the consensus that this is the best comic book movie ever made, I’d argue that this movie really best serves the non-comic book fan.

Why you ask? Well, the movie simply uses comic book characters to tell an immensely strong story. The comic book elements really only helped to give viewers expectations of the characters and to make for some out-of-this-world fighting scenes. This movie could have easily been just another spy/thriller with completely new characters.

Here are the 5 reasons that Captain America: The Winter Soldier is not just another comic book movie:

As I stated, comic book knowledge only helps you in this movie to start off with some background on the characters. Watching as a non-comic fan won’t leave you lost as to what is going on or have many events fly right over your head. The movie is accessible to anyone.

And truthfully, having that comic knowledge can also be a disadvantage as the Marvel Cinematic Universe (MCU) has taken a lot of creative liberties with the characters and storylines. What a comic book fan would expect might be slightly or even radically different in the movie. For example, my wife, struggled throughout the movie with understanding why some of her beloved characters were doing things that didn’t necessarily meld with the comics she had spent so much of her childhood engrossed in. For her, the liberties taken – though still entertaining – were hard to divorce from the Marvel universe she was introduced to.

We both enjoyed the changes but as die hard Marvel fans, in some cases, they left a bit to be desired.

As opposed to most comic book movies, no one in Captain America: The Winter Soldier has special powers (other than being really strong). As a result, you are not subjected to people making strange faces as they move things with their minds or inexplicable magic making things happen. This is hardcore punching, kicking, grappling, and occasionally, drop kicking.And this version of Captain America is one hundred percent bad ass from the first second of the film.

It’s like any of those Bourne movies but without the nauseating camera shaking and unrealistic non-humanly possible special effects.

This is arguably the most character driven comic book movie ever made. And that isn’t meant to be hyperbole. Each of the characters spotlighted in this movie is provided the opportunity to show who they are from the vulnerable to the tough, exposing their weaknesses as well as their motivations. This helps us to relate to everyone in the movie (good or bad), only strengthening the stakes of the plot.

Yes, Scarlett Johansson rocks her skin-tight body suit. Yes, there are obligatory shirtless Chris Evans scenes. And while watching the movie, I couldn’t help but hear other moviegoers gasping and expressing their elation at both. So this is an equal opportunity movie guys and gals. Enjoy accordingly.

On a more serious note, Captain America: The Winter Soldier tackles some all too real contemporary issues with its plot. Central to the movie is the question “What price is too high for safety?” And Captain America is the perfect person for that question to be reflected in as he is meant to symbolize the heart of America. When does sacrifice for safety cross into loss of freedom? How much is too much? I won’t spoil the movie here, but those questions are deeply delved into throughout the film. And I’m not sure you can say that for any other comic book film.

If for some reason you have not seen this movie yet, go see it. It is truly great. You will love every minute of it. And whether you are a comic book geek or not, it’ll definitely be one of the most entertaining films you’ll see this year.