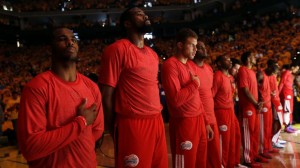 By now, you have no doubt heard about the Donald Sterling “don’t bring [black people] to my games” controversy. Amidst the conjecture about who is to blame and the gratuitous finger-wagging from anyone who has ever touched a basketball, been in a locker room, or smelled sweat after somebody else played a sport, there has been relative consensus that the Clippers players themselves are faultless. But, sometimes an uninformed person gets a keyboard and writes something so flagrantly absurd that it catches, and people actually agree with them. That’s what happened in an article published yesterday on Gawker called “Black People Are Cowards.”

I read the long winded diatribe which ascribed some responsibility in the quelling of the Don Sterling Recording-Gate issue to the Clippers themselves. Apparently, the players reversing their warmup uniforms so that the ‘Clippers’ name wasn’t on their chest wasn’t enough for him.

The author, a rapper, seemed to think that the players on the team should have simply boycotted their playoff game after the recording of Sterling and his girlfriend was released last week. He criticized them and then used that sample as a representative group for ALL black people. He went straight Don Lemon crotchety and brought up how black folks should just start walking off of their jobs when white superiority and privilege threatens or harms black people. He even cited television shows and magazines as points of trauma which we should spend our personal time combating via mobilized protest. Sounds exasperating.

Why? Well, he didn’t think that black people (like all of us) were brave enough to, I don’t know, survive a zombie apocalypse or something. He basically said that he doesn’t want a bunch of cowardly black people eating his finger sandwiches and farting on his couch during “Real crunch time. Life crunch time.”

Then, he went all philosophical on us and dropped this nugget of knowledge:

“For those of you who have made it this far without stopping for how furious at me your shame has made you, I want you to know something. I don’t really think black people are cowards. I think humans are cowards. Most of us. I think that regardless of where one’s phenotype places them within the imaginary concept of race, that the majority of us are content to live on our knees rather than die on our feet.

The problem is, we, us, black people, can’t afford to be like everyone else anymore. Not if we want to survive. I don’t know how we got here, but everywhere you look we’re at the bottom of the global totem pole. We need to make history. We can’t be cowards like every one else, not any more. In fact, we need to set a new standard for heroism. For bravery. For courage. Maybe a standard never before seen in the history of humankind. Extreme situations call for extreme measures, and in modern times our inferiority is ingrained in every single aspect of our lives, from our media, to our religion, to our science, to our public education, to our higher education, to Africa appearing to be the same size as Greenland on all of the maps despite the fact that in reality Africa is 14 times larger. It’s harder to see our enemies than it’s ever been. Our enemy isn’t white people. It’s people who value greed more than human life. Racial division is one of their oldest weapons, and media is their latest. We mustn’t forget how young this weapon is. I didn’t grow up using the Internet. The television itself isn’t even 100 years old. The idea of global celebrity, and global transference of ideas and perceptions of culture, has never existed the way it does today. Just as Howard Beale prophesized in Network in 1976, we’re up against “the most awesome God damned propaganda force in the whole Godless world.””

So, in other words, he intentionally goaded people (of all races) into reading a propagandized piece berating black people on a white-owned website (online) so that he could renege half way through and make it a self-love piece about empowerment and the dangers of the Internet (where he is publishing his piece) about black people being cowards? Right.

I especially like the part about how white people are not our enemy. It’s as if he was the person holding the recording device when Sterling admonished his girlfriend for being a “natural born fighter.”

Here is the underlying issue with this piece: black people – or people of color in general – are not responsible for teaching, cajoling, or otherwise coaxing the white and privileged out of their racism and malady of hetero-patriarchal capitalistic white supremacy. Not our job.

Whether most people are cowards or not is absolutely irrelevant in this conversation though I highly doubt that young men who were likely raised in mostly single-parent, female-headed households who defied many daunting odds to achieve athletic success in the foremost basketball league in the world would ever be referred to as cowards in any other circumstance. Because these men were cognizant of their contractual obligations, onlooking fans, mothers, uncles, sisters, and brothers who had sacrificed so much to help them get there, and the stadium staffers whose livelihood was dependent on them showing up, they are somehow cowardly. It seems the bar for bravery set by this rapper may just be so steep that he himself wouldn’t be able to surmount it.

I find it so incredibly flawed to assert that these young men were obligated to risk their own career longevity by boycotting a singular game because of a recording when Sterling had exhibited a hatred for black people (and other people of color) for so long. Somehow, this was deemed weighty enough to be the collapsing, unbearable straw weighing on the backs of these players? Miss me with that.

Let’s not even mention the seemingly insurmountable odds of walking, breathing, listening to music, or buying a Snapple and Skittles while black in this country. Black people are the epitome of courageous. So, I really can’t entertain the central criticism of the piece.

Today, Adam Silver, NBA Commissioner, announced that the Clippers owner will be banned from the NBA for life and fined the maximum penalty of $2.5M because of the recording leaked by his ex-girlfriend, V. Stiviano, to the media. In other words, a white person did something about white racism. Which, in my opinion, is how it should be. Any white person not taking a stand against racism is the true coward.Though I find the punishment laughable (I would have preferred Sterling be sent to Skid Row or Inglewood to perform community service for the rest of his life with an accompanying public apology), it focused on Sterling himself rather than the players who played no role in his actions.

For all the reasons mentioned in the Gawker sham, white people have long benefited from a long worn, persistent, and ‘sick and tired of being sick and tired’ social justice movement on the parts of people of color. The white and privileged are beyond cowardly for continuing to justify their inadequacies, failures, and personal flaws with terms like ‘affluenza.’ This is what cowardice looks like. A failure to face one’s own moral or ethical misgivings because race and wealth shield you from reality.

So, how about we not Mr. Rapper Gawker Writer. While your intentions in the ‘Come to Jesus’ aside in your piece might have seemed brilliant and poignant to you when you clicked ‘Enter,’ they actually put you in the ‘racial reformist’ camp: taking the spotlight off of race in favor of class, minimizing the role of whites in White Racism, never directly addressing a system of white privilege unilaterally responsible for the institutional biases against people of color, and placing the onus of racial change on the very group ill-empowered and rendered impotent systematically by those you deem blameless.

I call foul sir. To me, your inability to take whites to task in an arena so saturated by white superiority is not radical, it’s cowardly.