On Cliven Bundy and the Trappings of a Privileged White Racist 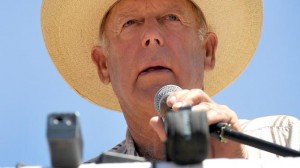 You may have missed the hullabaloo in Nevada with all the Don Sterling mess that’s going on. So, here’s a recap.

I often joke that I hope to one day be out of a job. Racial justice activism and education should be a profession with a clear end result. I hope it becomes obsolete in the near future. Sadly though, folks like Cliven Bundy – the Nevada rancher who denies the existence of the federal government – and his supporters are holding onto their racial hatreds so tightly that their palms are near bleeding from the tension.

What started as a story about a lone white ranger shirking his fiscal responsibilities and obligations has spun into social and racial commentary from an old school racist. Bundy has long since stopped paying land use fees to the federal government because he has chosen not to recognize its existence. For almost two decades, he has grazed his cattle on federal land without paying the dues expected and remitted from everyone else in his profession.

Now, while he was first thought to be a martyr for the right’s unjust cause, his story slowly spiraled into a pile of manure when he started opening his about about ‘the Negroes’ and the merits of American slavery.

The rants started with Bundy making comments questioning whether or not blacks fare better as slaves:

Yes. Bundy often wonders if black losers (you know, all of us) would fare better as slaves rather than as free people who have the undeniable desire to use government housing subsidies, abort our children, and put our kids in prison. What a quandary we have here. Because, I mean, these are obviously the only two life outcomes available to modern black people: slavery or all out loser-ship.

Next, Bundy attempted to defend himself as the grave only got deeper. (Jump to about minute 5:30).

So, to be clear here, Bundy is a resident expert on the Civil Rights Movement and he has personal knowledge of Dr. Martin Luther King, Jr’s true intentions. Not only that, he should be able to use derogatory terms toward black people otherwise MLK “hasn’t done his job yet.”

Conservatives first rallied around Bundy making him out to be a local hero. After his slavery bit though, they have all been scampering away with their tails between their legs. He has since apologized, but his stale apology does little to change the structural biases afforded in his favor after his blatant disregard for federal law. Conservative media bent over into pretzels attempting to raise this guy above the fray, touting his heroism and courage in the face of evil ‘big government’ only to have him fizzle into what most privileged white Baby Boomer males are: racist.

File this away in the “Not Surprised” folder. Label it with the “No Duh” sticky. And stick it in the “Was it Anymore Obvious?” file cabinet. This is modern conservatism. This is what white privilege looks like. Don’t look away. Remember, I already told you that these are our racists and they are never going away.