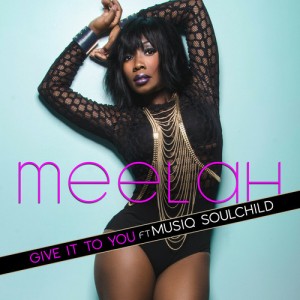 After taking a (too) long absence from music to focus on motherhood, Meelah Williams of 702 fame is back and slaying eardrums everywhere. Her new single “Give It To You” features her baby-daddy Musiq Soulchild, and these two impresario voices were meant to meet on wax. Meelah has really been making moves lately to reignite her career. She is a new castmember on this season of R&B Divas ATL on TVOne. She released the buzz single “Let You Go” a few months ago. And now that she is s solo act, she has remixed her image. But thank goodness, that voice is just as alluring as it has ever been. The single samples “Got Your Money” by Ol’ Dirty Bastard feat. Kelis, with Meelah serving a killer interpolation on Kelis’s chorus vocals. Sultry is an understatement. And once Musiq takes over on the second verse, the song transforms into something greater than just another sexually tinged slow jam. He brings out that deeper emotion and longing.

This song is a certified smash. 702 may be no more, but hopefully, this ushers in a new era where Meelah can achieve the success that she deserves.

What do you think of the track? Sound off in the comments section below!