Ta-Nehisi Coates Has Courage to Make the ‘Case for Reparations,’ Do You? 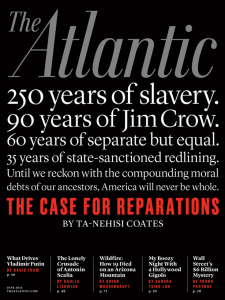 Yesterday, Ta-Nehisi Coates nearly broke Twitter by laying out a thesis long explanation as to why reparations for American slavery, Jim Crow, and housing segregation could, in fact, be warranted. The piece wasn’t just about paying back money for illegal seizure and destroying of property and assets. It was about how hypocritical this nation is when celebrating Independence Day every year whilst ignoring the horrifying breaching of civil liberties as a result of the enslavement of Africans and African Americans. But, the piece isn’t about cash or debts. It is about action.

His piece took a lot of courage to write given the overt unpopularity of reparations. Sadly, I have seen only lip service offered to support actual legislation which seeks to investigate and assess reparations claims from African Americans. Other than plenty of back patting for Coates, little else is being done even by prominent black activists. I am trying to do something about that.

In the longform essay, Coates outlines the historical happenings dating back to the first Africans who landed on the United States’ shores to contemporary youngsters still suffering the inter-generational impacts of institutional racism. Coates was not always for reparations though. He explains in a secondary article on the The Atlantic that his view has changed over time.

“For me, this current article—an argument in support of reparations—began four years ago when I opposed reparations. A lot has happened since then. I’ve read a lot, talked to a lot of people, and spent a lot of time in Chicago where the history, somehow, feels especially present. I think I owe you a walk-through on how my thinking evolved.”

Coates goes on to explain how experiences over the years piqued his attention and interest in the topic. Eventually, he reached out to his editor with a rough idea for what would become the final cover piece called “The Case for Reparations.” It was the general lack of knowledge of history, the glazing over of salient human experiences, the inane notion that even facing race would somehow detract from America’s greatness, that compelled him to make a very public claim that reparations conversations require investigation.

“This process was not as linear as I’m making it out to be. But it all combined to make me feel that mainstream liberal discourse was getting it wrong. The relentless focus on explanations which are hard to quantify, while ignoring those which are not, the subsequent need to believe that America triumphs in the end, led me to believe that we were hiding something, that there was something about ourselves which were loath to say out in public. Perhaps the answer was somewhere else, out there on the ostensibly radical fringes, something dismissed by people who should know better. People like me.”

The piece is mandatory reading for any responsible American. One thing that stuck out to me about the post is the attention it draws the Representative John Conyers’ (D-MI) actions to bring reparations to the fore. In every Congress since 1989, Rep. Conyers has introduced H.R. 40: Commission to Study Reparation Proposals for African Americans Act. This legislation seeks to simply investigate and analyze the long-term impacts of slavery. The bill is taken never taken seriously because our dominant white supremacist culture indoctrinates us that this idea is too big, too outlandish, or simply, buffoonish. What many whites don’t have a rebuttal for though is that we research everything under the sun – repealing Don’t Ask Don’t Tell, the Benghazi incident, Obamacare, etc. – but reparations have received the “Do not pass go” card indefinitely from whites. This is a sad and unfortunate fact.

Coates recently spoke with Bill Moyers about the piece Moyers referred to as “provocative.” In the conversation, he notes that white supremacy –  a fundamental precursor for reparations – is our American heritage. He says that it isn’t just about what whites owe blacks. Instead, it is about state condoned discrimination and injury toward African Americans and making it right at a national level.

I have found it unnerving how many  activists and writers took to Twitter and all manners of social media to congratulate Coates (who isn’t even on Twitter by the way) for writing such a phenomenal piece. The piece is amazing. There is no question about that. But, sitting in our echo chambers, reading the piece privately, and telling one another how great it was that we read it will get us nowhere.

It is patently obvious that Coates wrote the article to make the case for each of us to know more, be more, and do more. So, I did. I started a petition and hashtag (#SupportHR40) to challenge the US Congress to do better when it comes to reparations. It may be small, but it is an effort to show my leaders in Congress that African American lives and history are important, valid, and worth investigation.

I implore you to read the entire article for yourself. Also, take five minutes to sign the petition. We are all we got. So, let’s do this. Together.