Black (natural) hair is unkempt, nappy, sloppy, dirty, a mess, ‘ghetto’, etc. We have been force-fed these adjectives about our hair since childhood – at least I know I have. I was expected to wear straightened, blow dried, press and curled, or otherwise unnatural hair textures growing up. Unnatural because my hair grows completely kinky, tightly coiled, and thick as all get out from my scalp. It wasn’t until three years ago that I put away the master’s tools keeping my hair – and me – in mental enslavement. I stopped blow drying, straightening, and putting stress and tension on my strands just to please other (usually white) people. But, after seeing the public outcry about Blue Ivy – two year old daughter of Beyoncé and Jay Z – wearing her natural hair texture, I am reminded how white expectations of beauty still influence all of our lives.

I took time to comment a few years back when folks everywhere were in uproar over Gabby Douglas’ neat coif as she killed it at the 2012 Olympics. I felt that maybe those calls for Douglas to style her hair for an athletic competition were anomalous. But, when all the hullabaloo erupted about baby Blue Ivy, I chose to let others do the talking. This time though, it has gone a hair too far as some simpleton decided to create a Change.org petition called “Comb Her Hair”. Now, I won’t give the petition any more shine than mentioning it but it is frightening that over three thousand people have taken the time to sign it – most of whom are probably black women. Let’s discuss some of the troubling reasons why.

It was while walking through the aisles at an Orange County Target this weekend looking to nab a deal on my favorite Shea Moisture hair care products that I realized how absurd my hair life is. For as long as I can remember, I have had to survey the entire hair section of the store in search of the “ethnic” section. Usually just a few shelves (if any) are tucked away in a corner somewhere with assorted pomades and greases, shampoos, conditioners, leave-ins, and other accoutrements. When I was younger, it was very limited. But, over the years, I have seen this section grow now boasting branded sulfate free shampoos, styling butters, and oil elixirs. I still struggled to find the products I needed – mind you, this was my fourth trip looking for deep conditioner.  What is more depressing about this wild goose chase is how many items there are marketed to white women and how few there are specifically for woman of color.

Bottles of conditioner describe their results as yielding, “shiny, bouncy hair,” and “fuller, thicker tresses.” Those certainly aren’t for black women. So, I often find myself watching reviews on YouTube first, purchasing hair care products on Amazon, and just hoping for the best when they arrive. The white women on commercials walk in the room with hair that looks like a tumbleweed, then – magically – a pink kangaroo drops her hair products, the white lady sneaks off to the public restroom with a devious look in her eyes, then voila! she comes out looking like Paul Mitchell, John Freida, and Madame CJ Walker were little genies in the bottles. That’s what hair life looks like to the mainstream.

Sadly, that just isn’t the case for many women of color especially Afro-latina and black women who boast the kinkiest of textures (like me). Black hair represents a great many let downs, disappointments, mistakes, and restarts that leave women feeling jaded and isolated. For many, the answer is to simply “fry, dye, and lay to the side” whatever hair they have left after brutal chemical treatments. For others, it turns into a hatred of their natural hair texture, a texture which will never look like that girl’s in the kangaroo commercial, a texture they hope to never hand down to another little brown girl, in essence, a texture they wish never existed.

These are the types of women who draft, circulate, and support petitions demonizing a two year old.

Once during my first job out of college, it started unexpectedly raining. As a perpetual flat, cloth shoe wearer, I ended up with soaked through shoes. When I got back to my basement office, I sat in front of a floor fan to dry my pants and shoes. I never thought anything of it. It was weeks later and my white female boss pulled me into her office to give me the ambiguous “personal hygiene” talk that I knew something was awry. Having always taken conspicuous care of my hygiene  – even once brushing my teeth for so long I wore the enamel off my front two – I was flabbergasted that the conversation was even happening. I acknowledged that I shouldn’t have taken off wet shoes and apologized.

But, when I thought the conversation was over, my boss began questioning me about my hair. “Are you washing your hair everyday?” “Are you making sure it stays clean?” I nodded my head in both amusement and befuddlement that a) she thought everyone had to wash their hair everyday because white people typically do and b) she somehow thought a random event like unexpected rain meant my hair wasn’t clean. How the two were related, I couldn’t tell at the time. It wasn’t until years later that I realized the events themselves were only conjoined because of my brown skin.

My flat twists, French braids, singles, sew-ins, and ponytails were an office gem. White folks would tell me that part of their excitement everyday was seeing how my hair would change overnight. It was the spectacle of my highly flexible, ornate, and intricate hair styles that led my boss to wonder how I washed it or if I was washing it at all. Her (mis)judgements of my hygiene spilled over into an assumption that my kinky hair was unclean too. And her ignorance – as well as her peers’ and direct reports’ – was complicit in the dehumanizing effect their comments had on me for the years I spent there. 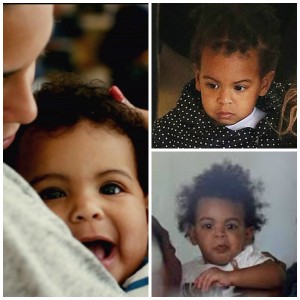 Baby Blue Ivy is absolutely adorable. She is a brown girl who resembles both parents but seems to favor her mother most. She is beautiful. Sadly, the fixation on her “uncombed” hair (mind you, I don’t think I have combed my hair in at least a year) is turning this beautiful little girl into an object for our amusement, ridicule, and disdain. Much like my co-workers, folks are crowding around little Blue Ivy awaiting their chance to pounce on what seems like a fair criticism to make of anyone…except that she is a child…a two year old child.

It is the internalized self-hatred that makes grown-ups pick on kids. You see, walking around, not seeing positive images of you reflected back hurts. And, for the weaker being, that can cause irrational rage and lashing out at the less fortunate. But, it is the work of white colonialism and supremacy that moves one to support a petition because “It’s disturbing to watch a child suffering from the lack of hair moisture.”

What is disturbing is how many children around the world are starving, dying of malnutrition, or withering under the weight of malaria. That is a little disturbing to me. Perhaps, what is disturbing is the number of children both in America and abroad who are captured, kidnapped, and used for sex trafficking, genital mutilation, or child marriage. I think that is disturbing as hell. Maybe, what is disturbing is the fact that loser black women sit behind computers attacking little black girls because they can’t stand the follicles, cortexes, and cuticles that look back at them. I am so disturbed by that, I might have to start a petition or something.

It disturbs me that so many black women are still moved my white supremacy as to rally other black women against a child. It saddens me too. To know that women like that inhabit a world, parent little girls, and have access to the World Wide Web on the same Earth as my baby girl is frightening. Luckily, I am teaching her to love herself. I am showing her that she is beautiful. When she looks at me and says, “Mommy, I love my hair and I love myself,” I know that this two year old has a shield of protection around her. Hopefully, little Blue Ivy has the same thing. And maybe, just maybe, these hateful women will find themselves left only with their reflection to criticize and demean. At least then, us Electric Ladies can get back to the business of being free.