10 Guilty Pleasures That Will K.O. Your Waistline

I like to eat. And at one time, sugar and I were the best of friends. I’d eat candy for lunch. A mountain of ice cream covered in caramel was a sensible dessert. And if I was parched, a 3 liter (yes 3, not 2) bottle of soda would hit the spot. Those eating habits are a young man’s game. And not just any young man; a young man with an overactive metabolism enrolled in sports programs year-round.

But I’m getting older. And everybody ain’t able. But, that doesn’t mean I can’t daydream about all the fattening things my younger self would enjoy.

I’m starting to come to terms with the fact that I’m not 16 anymore. If I miss out on sleep one night, it actually affects my brain function for the next day. If I don’t drink water, my mouth will go dry and I will get a debilitating headache. And food? The calorie rich has a penchant for sticking with me for the long haul.

For me, the foods below are the worst culprits. I see them and a switch in my head makes it almost impossible for me to resist. So, hopefully publicly fat-shaming myself will help me to start to cut these out of my diet. If you haven’t tried any of these temptations, don’t start now. No matter how glorious the pictures may look. 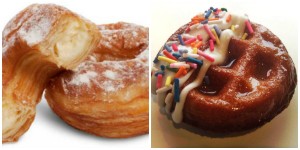 In either case, you get the best of both worlds … and you will taste every calorie. 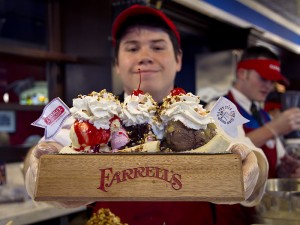 If you are going to eat like a pig, why not eat from a trough? I guess that was the thinking behind the Ice Cream Trough offered at Farrell’s Ice Cream Parlour Restaurants. As you might expect, a restaurant with Ice Cream Parlour in the name specializes in the stuff. Featuring Thrifty ice cream (aka the best ice cream eva), there is an extensive assortment of ice cream creations you can buy. From a banana split priced at just under $10 to the Pig Trough (basically the banana split doubled) to the 30 – count ’em – 30 scoop Hot Fudge Volcano, your stomach is sure to leave happy … or queasy…or happy queasy. 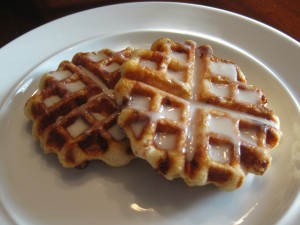 When I first saw these, I thought it was a mirage. But, they are real and embarrassingly easy to make.

If you hate the agony of having to wait for your Pillsbury cinnamon rolls to finish baking, this is for you. Buy a roll from the store, fire up your waffle iron, and let those puppies cook for 2-3 minutes. Once done, drizzle with your frosting and you have a delectable treat you’ll want to keep eating over and over again.

Are they for breakfast or dessert? Who cares. Don’t let labels get in the way.

The Cheesecake Factory is not know for healthy cuisine. They are most known for sodium and their multitude of takes on one of the most unhealthy desserts in existence: the cheesecake. And these two variations take the cake (see what I did there). I blame my wife’s three pregnancies for our discovery of these two desserts.

The Limoncello Cream Torte isn’t even technically a cheesecake as it is just layers of vanilla cake and lemon mascarpone cream, and as such, it at least “feels” like a lighter dessert (though I assure you it ain’t that much lighter in caloric content). It is absolutely sinful. It is all kinds of wrong, but it’s oh so right.

Now, the Ultimate Red Velvet Cheesecake is just what it sounds like. It is the ultimate. This is not for beginners boys and girls.

Layer upon layer of red velvet cake and cheesecake are piled on top of each other, only to be topped with a thick coating of cream cheese frosting and white chocolate shavings. Lightweights will be put under the table by this ode to all things sweet, decadent, and waistline expanding. Enjoy at your own risk … may be habit-forming.

Anyone can have a cookie for dessert. But why not take things to the next level with a cookie pie? BJ’s Restaurant and Brewery is known for its dessert staple, the Pizookie, a cake pan sized cookie served fresh from the oven at your table. While the California chain initially only offered chocolate chip, the options seem to have expanded exponentially.

Now, you can get other flavors like cookies ‘n’ cream, peanut butter, white chocolate macadamia nut, salted caramel, or even triple chocolate. But that’s just the beginning. There’s the trio of mini pizookies where you can sample 3 of the flavors listed above, or if you’re really feeling froggy, opt for the Pizookie Party Platter, and XL size that you can customize with up to 4 different flavors. Each of these choices is topped with scoops of vanilla bean ice cream, of course.

When I asked the cashier at a waffle truck here in SoCal what speculoos (pronounced speck-yoo-lows) was, I was told, “Try It. It will change your life.” And he ain’t neva lied.

This ingenious spread is made from actual cookies. This cookie butter is created from ground caramelized gingerbread cookies. Just like peanut butter, you can get it either crunchy or smooth. It’s upscale cousin Biscoff Spread is made from using the Biscoff company’s world renown Belgian cookies. Either version is just a touch spicy, buttery smooth, and sweet going down.

And just like the recent Nutella craze, you can put this stuff on anything: toast , crackers, waffles, cookies … you name it. 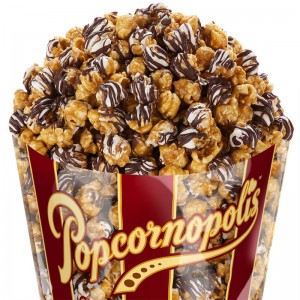 Everybody likes popcorn. If you don’t, get yourself checked; something must be wrong with your taste buds. And caramel corn, popcorn covered in caramel, is a perfect combination of salty,sweet, and crunch. But as you may have noticed, we go big or we go home. And any old caramel corn just won’t do.

That’s why Popcornopolis ought to be punched in the face for its Zebra popcorn. The gourmet popcorn manufacturer took its caramel popcorn, easily the best on the market, and drizzled it with white and dark chocolate. All at once, it’s chocolatey and caramely and salty and crunchy and chocolatey all over again. It’s an endless cycle of enjoyment. And when you reach the bottom of the bag, you’ll be mad.

Food courts at malls across the nation have featured the cream frosting covered calorie vehicles that Cinnabon has been producing for what seems like eons. Cinnamon rolls are already bad enough for you, but the visible butter that you can watch dripping off of a Cinnabon cinnamon roll in a display case is a sight to behold.

I won’t go into detail on all of the dough/sugar/cinnamon/cream cheese frosting combinations that “restaurant” has come up with, but I will say that after all of this time, nothing beats the original. And that heavy feeling in the pit of your stomach when you are all done is joy. Pure, unadulterated joy. 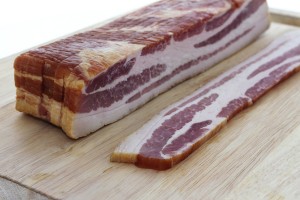 Any self-respecting eater knows that bacon is the king of breakfast meats. But if you really want a bacon experience, you need a real slice of bacon. When I say a real slice, I don’t mean that paper-thin crap that you can read a newspaper through. I mean a real, thick sliced piece of bacon. And Daily’s delivers.

It’s hardwood smoked for that deep, rich flavor, and it’s thick enough that when you bite into it, you know you are really eating a piece of meat. It’s not too salty either, so you can enjoy the meatiness of your bacon without feeling like you are licking a salt brick.

It definitely makes ANY food (or meal for that matter) better.

Health nuts everywhere have been bemoaning the danger of bread. They claim that wheat leads to the contraction of autoimmune diseases like type 1 diabetes, rheumatoid arthritis, and multiple sclerosis. But we love our bread. And if we are going to eat bread, we are going to take it to the extreme.

Enter Greenlee’s Best Cinnamon Bread. There is frosting, cinnamon, butter, sugar … all the ingredients for an awesome eating experience. Most people just put it in the toaster, but anyone with a forward thinking mind will know that this bread is primed for french toast (no syrup needed).  That, in a word, is EPIC.

I can’t go without mentioning one of my all-time favorites the beignet. Call it a beignet or a donut, it’s fried dough covered in powdered sugar. Just that simple. This soft pillow of sweet is delicate, and you’ll want to eat it carefully to keep the layer of powdered sugar intact on its perch. And if you really want to eat the pinnacle of beignets, travel to New Orleans and head straight to Café Du Monde. Do not pass go. Do not collect $200. Just saddle up and enjoy the ride.

There you have it, some of the best tasting and worst for you foods you can find. These are my weaknesses, and hopefully by listing them out with high-def pictures and details on just how bad they are, I can control my urges to eat them next time our paths cross.

Do you have bad foods that are so wrong they make you not want to be right? Share your weaknesses in the comments section below!