Thanks SCOTUS, Me and My Uterus Will Never Shop at a Hobby Lobby Store 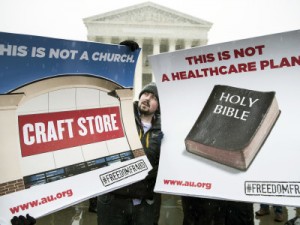 Monday, the Supreme Court of the United States (SCOTUS) ruled in the Burwell v Hobby Lobby case in a 5-4 decision that any employers with genuinely held religious beliefs can opt out of providing employee coverage for contraception under the Affordable Care Act or Obamacare. Citing the 1993 Religious Freedom Restoration Act, justices found that “closely held” for-profit entities had the same rights as non-profits. Five conservative men on the court, in essence, reduced the conversation about women’s rights, healthcare, and equal freedoms under the law to a misogynistic take on Christianity. And, it’s disgusting.

I can’t help but hearken back to Rush Limbaugh’s assault on Sandra Fluke, a Georgetown Law student who spoke before Congress in 2012 regarding the contraception mandate in the ACA.

This is precisely what many conservatives think about birth control. They think it is slut medicine. Somehow, only whoring, prostituting “coeds” need contraceptives. Contraception isn’t just about sex and baby making. It just isn’t.

Let’s acknowledge that contraception is just hormones so a host of people take them. Trans men and women, queer, and gender fluid folks take them for actual medical reasons besides wanting to have endless amounts of sex. Lesbian women who have no intention of making children take contraceptives for medical issues as well. And, cis women do too. I took birth control for years before I became sexually active. I had terrible, almost debilitating, menstruation bleeding and pains that made it hard for me to get through my school day. And since I started my cycle in elementary school, I endured that struggle for at least five years before my mom decided to get me a low dose oral contraceptive to help me become more regular.

Then again, the justices would know that if they had sided with the women on the Court.

I personally struggle to see how this is a win for Christianity since it just means more women will struggle to access effective birth control which may lead to more abortions. Obviously, upper- and middle-class women will likely be unaffected by this decision cause they probably weren’t working at Hobby Lobby anyway. But, working class women at smaller companies now have this precedent to contend with when attempting to manage their own health. And, most Christians support the employer contraception mandate. By the way, Viagra is still seen as medically necessary so no issues there right?

There is an important aspect of this conversation worth noting here. Just because these privately held companies don’t have to cover contraception, it doesn’t mean that employees won’t have access to it. They will. The government may still subsidize their access to contraceptives if their companies opt-out. The process may take more effort because of the cost-sharing process. But folks who need contraception won’t be barred from getting it. Still, this precedent leaves the door open for a denial of anything that is deemed out of step with Christianity. Can companies like Hobby Lobby also deny employment to folks in the LGBTQ community? Can they enforce company policies denying non-Christians the exercise of religious freedom like wearing emblems or hijabs on the clock? Where does this end?

There are only two solutions we, as the people, can take in situations like these: a) vote and b) stop supporting businesses that work against our self-interests. Folks need to turnout to vote every November even in non-presidential elections. While the justices on the SCOTUS are appointed, they are chosen from a standing pool of candidates available at the time said appointments are made. We decide who gets there. And we pick the congressional members who confirm them. Secondly, we have to stop supporting businesses that are against personhood for everyone. For me, that is companies like Hobby Lobby, Apple, and Chic-Fil-A. Our support for these companies is our support for anti-women, anti-human rights, and anti-LGBTQ corporations.

We have to do more and demand more from those in DC pulling the strings in our daily lives. And we have the responsibility to hold them accountable in cases like these when they get it completely wrong.