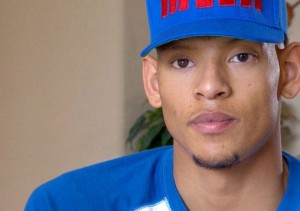 I became aware of folks’ insensitivity and ignorance about my genetic disorder, Marfan Syndrome, last year while watching the Owen Wilson and Vince Vaughn comedy, “The Internship.” In the film, Will Ferrell jokingly describes Vaughn as having “the big man’s disease…the giant killer.” In that moment, the disorder which causes countless individuals – usually undiagnosed athletes – to spontaneously collapse and die was reduced to a joke. Sadly, for folks like Baylor basketball player and ex-NBA hopeful, Isaiah Austin, and me, it just isn’t very funny.

I, like Austin, am very tall. I am six foot four inches tall – extraordinary height given I am a woman. I have been over six feet tall since middle school. I was diagnosed with Marfan Syndrome, a connective tissue disorder affecting approximately one in five thousand individuals, just before high school. At the time, I played basketball, ran track, and played volleyball. Growing up in a single parent household, I was well aware that my height was an asset I could use to get me a full ride to college. I was being scouted as early as eleven years old.

In eighth grade, my optometrist suggested my mother take me to a geneticist to check me for a condition affecting taller people. She noticed a lens displacement in my right eye that was rare enough to draw her attention. She then asked me about my double-jointedness, back curvature (something discovered randomly at a school check-up), the shape of my feet, and my skin. She noticed that I developed stretch marks on my lower back, knees, and shoulders in elementary school. For her, these were tell tale signs that I could have Marfan Syndrome.

After weeks and weeks of testing and doctor’s appointments, the geneticist sat my mom, dad, and I down to let us all know that I did indeed have the disorder. He believed that, while most folks who are diagnosed get it from their parents, I developed it through spontaneous mutation.

He told us I would have to cease participation in all competitive sports and reduce my strenuous activity as my aortic valve was already expanding. He told me most people like me lived into their forties and fifties. It was such a horrible thing to tell a thirteen year old.

I notified my coaches. I stopped playing basketball – my absolute favorite sport. The most painful thing was watching my team play our championship game from the sideline. I cheered them on as they won but I was heartbroken about it. It’s almost two decades later and it still hurts a little.

In college, I had to have emergency open heart surgery to correct a leaky aortic valve. A surgery most folks have in their elder years, I was having over winter break my junior year of college. At twenty years old, I was confronting death. It was terrifying.

But, this isn’t a sad story. Doctors told me I would lose my vision over time and likely never be able to wear contacts. Instead, I debuted my new contacts just before my wedding day. Those same doctors once told me I would never have children. They said, if I did, I probably could only have one, I would be bed ridden, and I’d only be allowed to deliver via C-section. I now have three beautiful children, and though I was more than willing to, I have never had a Caesarean to deliver any of them. Though the disorder has still placed some stark limitations on my life – probably more than I would like to admit – I am living my life happily with it.

But I am the exception to the rule.

Not every person in the US with Marfan Syndrome has an optometrist perceptive enough to catch the disorder before it becomes an irrevocable problem. The Affordable Care Act raises the likelihood that they’ll have proper medical coverage if they are diagnosed. But, the disorder is still rare enough that folks think of it mythically as the thing that Abe Lincoln had or whatever killed Olympic athlete Flo Hyman or basketball star Chris Patton. Will Ferrell’s joke is evidence that the disorder hasn’t been humanized or normalized enough.

At this point, it seems absurd to me that extremely tall individuals are not automatically tested for Marfan’s. Austin stands at seven foot one and is half-blind. His NBA hopes were just recently dashed when the disorder was discovered. Imagine how many Austins are passed on to the pros… Since the consequences of not knowing one has the genetic disorder can be so grave, professional athletes should be screened as a prerequisite to enter their chosen sport.

But, that won’t happen until it stops being the punch line and starts becoming a part of a larger conversation about the very real disorders and disabilities impacting individuals every day. We aren’t mythical and our daily struggles are worth more than cheap comedy.

We are here. We are thriving. And, we are not a joke.