On Black Humanity and the ‘White Gaze’ 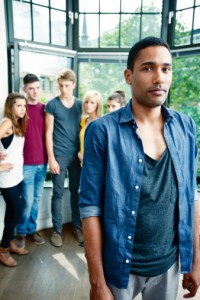 “Is it because I’m black?” This is the question we often ask ourselves when the taxi won’t stop or the other pedestrian on the sidewalk won’t smile back or when coworkers intentionally exclude us from lunch dates and such. We wonder if the ‘white gaze’ – simply the ubiquitous, loaded judgement from mainstream whiteness (not just white people) which scrutinizes, categorizes, and systematically isolates people of color – has taken priority ahead of our humanity. I ask myself this question several times a day – not out of loneliness or wanting. But, as I move through this world, I have to ponder at the largesse and burdensome presence that is mainstream white gaze.

I have only ever attended predominantly white universities. First, it was USC, then California State University, and now, University of Chicago. Thus, I have never been in a racial majority at my place of higher education. Accordingly, I have normalized certain daily microaggressions which come along with that territory. From the more extreme occurences like a white girl from southern California lashing out at me with “sorry we’re not ALL from the ‘ghetto’!” in a socioloy course to the tacitly rude people moving my things to another desk when I step out to go to the restroom, I have grappled with the overbearing actions against me which – I can only assume  – are because of my skin color. Even now, I find myself speaking to others who seem to have no desire to speak to me. I smile only to have the gesture unreturned.

Some folks say that – as people of color –  it is our job to simply ignore this stuff. They say that if we complain, draw any attention, or demand better treatment, we are simply fighting a losing game. They, in essence, believe that a request for humanity is far too revolutionary to be realistic. Instead, we should accept our diminished status, walk with our heads turned down, and exist in a vaccuum of outward isolation only reserved for the unwanted, undesirable, and unpalatable members of society. We are closeted behind glass expected only to be seen not heard, co-opted not credited, and appropriated rather than acknowledged.

Now, some folks say they really couldn’t care less about ‘white gaze.’ They say that whiteness is so deeply couched in privilege that it can’t be saved. While I think that assertion deserves some nuance, I also think it’s is applied as a blanket in scenarios where it simply doesn’t belong. At work, white gaze matters. I know first hand that jealous, bitter, and angry coworkers and managers can directly impact one’s livelihood. While at Disney, I spent more time trying to get people to like me to ensure I would get the pay I deserved than doing actual work to earn higher performance scores. Why? Well, frankly, many white people don’t give a shit about performance of other white people. They are more concerned with how much they like one another, if they want to drink a beer together, or if they like similar music. In my experience, my ability to do the work was never questioned but my commitment, friendliness, availability, approachability, etc. were what stood between me and higher performance scores.

Since leaving corporate America, I have still had to contend with the rewards and punishments doled out when I refuse to conform to what is seen as respectable by whites. The piercing stares, the comments about my ‘unkempt’, ‘wild’, or ‘messy’ hair, and the perpetual questioning regarding why I got married so young (because, ya know, it must’ve been because I was pregnant or something), are all parts of my daily narrative. Where “Shaft” had his theme music, I have shameless eyes. Whether I choose to care or not, I have to acknowledge their existence.

In a world where so many people (white, black, and everything in between) are desperately seeking ‘post-racialism’, I have to continue shining a light on the incongruencies of daily life for the black body. While I have never been physically harmed, I have been handcuffed and arrested because of the optics of the white gaze. Respectable or not, my high GPA and articulation skills didn’t save me then. And while many in the jury of the public piece apart the lives of John Crawford, Ezell Ford, Michael Brown, Renisha McBride, Jordan Davis, Jonathan Ferrell, Trayvon Martin, Eric Garner, Marissa Alexander, Dr. Ersula Ore, Darrien Hunt, and Sean Bell, they fail to connect the microaggressions to the violent events black women and men have had to endure.

No, it isn’t just me being sensitive. No, it isn’t just a few rude people on the train. Yes, it is because I’m black and it is only by the grace of God that I am still here to talk about it.