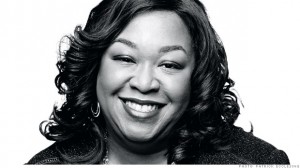 I guess Shonda Rhimes didn’t get the memo. She was the latest victim in bigoted white America’s endeavor to undermine successful black people. And she certainly won’t be the last.

Alessandra Stanley, writer for the New York Times, is probably in hiding right now. Not only did she open her garbage television editorial called “Wrought in Their Creator’s Image” with this line – “When Shonda Rhimes writes her autobiography, it should be called ‘How to Get Away With Being an Angry Black Woman.'” –  she went on to describe Rhimes’ capable, educated, and tenacious black women characters as “intimidating,” “haughty,” and “authority figures with sharp minds and potent libidos.” Noting how these women aren’t depicted as “maids or nurses or office workers,” Stanley seemed positively impressed that Rhimes and her team of prolific writers have figured out a way to characterize black women as anything but a stereotype…then she stereotyped them all (and Shonda herself) as angry.

Honestly, I am not entirely sure what the goal of the article was exactly. In one keystroke it seemed that Stanley meant to laud Rhimes for her innovation and creativity when developing her gamut of black female characters. But, moments later, the writer noted how much more “benign,” “elegant,” and “serene” Clair Huxtable was from “The Cosby Show.” Describing Rhimes’ newest character, Annalise Keating from “How to Get Away With Murder,” as “this one,” Stanley wraps an entire article in well-meaning bigotry. My favorite parts were her descriptions of previous black female characters as “sassy” and “uh-uh-ing.” Oh, and this part.

“Ms. Rhimes has embraced the trite but persistent caricature of the Angry Black Woman, recast it in her own image and made it enviable. She has almost single-handedly trampled a taboo even Michelle Obama couldn’t break.”

Setting Stanley’s stupidity aside for a moment, there seems to me a bigger, graver issue here. Rhimes is one of the fastest rising producers in Hollywood. She is generally well-respected and her television shows are highly sought after. Being a Dartmouth and USC grad, she has followed along a well-lit path which typically shields one from the tropes of the purported black monolith like the Jezebel, the Sapphire (angry black woman), or the Mammy. But, even amidst her trailblazing, this writer deemed it completely rational to devote over fifteen hundred words to painting Rhimes as a high-falooting, turnt up, spitfire black woman just looking for a reason to mad dog someone. Heck, she even managed to toss Michelle Obama under the Angry Black Woman Tour Bus a few times.

Just a few months ago, Rhimes spoke at her alma mater and she encouraged graduating seniors to get out and change the world. She implored them to do more than write hashtags. She encouraged them to use their know-how, connections, financial opportunities, and privilege to make a real difference in their communities. Within her powerful message was an embedded premise and inherent devaluation of online activism (sometimes called “hashtivism“).

I, like many other activists who frequently use online media to complement the real-life work we do, was particularly disappointed in her mainstream message that activism has to look one particular way in order for it to be valid, lasting, and impactful. Her words – though they belong to her – seemed to come from a place of pretentious respectability. She seemed to be calling upon accepted colloquialisms which were coined to diminish much of the online work performed by people of color. It wasn’t the first time she publicly declared her respectability but it was more harmful than she may have intended.

Never mind the fact that hashtags were what boosted many of her shows to number one ratings, it was Rhimes’ rebuttal to online acitvists – mainly women of color – which was the most dismaying. She, in essence, said “Well, I wasn’t talking to you.” For some, this was enough to label her as a “sell out” or “elite.” Rightfully so. For others outside of communities of color, this likely didn’t even graze the radar.

Thus, here we are. Rhimes has been doing all the right things, saying the right stuff, working the right way, and kicking the right ass but still she has become a subject of ire for mainstream white America. Well, what is she to do now? She (and others) have responded. But, does it really matter? Nope. Probably not.

What Rhimes doesn’t seem to understand is that attempting to be colorblind, conforming to mainstream ideals of respectability, and contorting in such a way almost to appear completely removed from one’s blackness won’t make one white. It certainly won’t shield us from the ire of white gaze. If anything, it just makes the pill of deep-seated white bigotry that much harder to swallow.

There is no one individual whose personal good behavior and upstanding citizenry will correct centuries of anti-black sentiment. It is literally impossible. Perhaps Rhimes may consider now though that all of us online activists are working to repair the very pathologies that victimized her on Friday. Maybe, instead of disregarding the very important work we do in the name of respectability, Rhimes will face the reality that skin folk sometimes are your kin folk. Frankly, I’m not sure what she’ll do next.

But I am completely certain bigoted white America couldn’t care any less. Bigoted white America doesn’t care what you do right. If you’re black, that’s an accepted character flaw. No matter if she saves a newborn kitten from a tree tomorrow, swoops into a burning building to rescue twenty school children and their class hamster, or figures out how to get the cruddy stuff on the condiment jars from sticking to the cap, she’ll be viewed exactly the same way she was today: an “insert demeaning descriptor here” black woman. Of all of this, that is truly a shame.