Why Charlo Greene’s “F–k it. I Quit” Is a Revolutionary Act 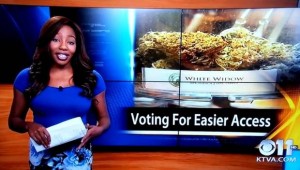 I have never had the courage to just walk off of a job. I have wanted to, many times. But, I never had the economic ability (or guts) to do so. Beyond the monetary constraints, there was this lingering concern about being blackballed, blacklisted, and otherwise blackified for not conforming to the respectability politics of the workplace. I behaved as completely politically correct as possible to keep food on my table and a roof over my family’s head. I just didn’t end up having much to show for it.

I received negative treatment anyway. After years of acting completely respectable, I still struggled with being labeled, undermined, and isolated in my career in Corporate America. So, maybe I should have just said “F–k it. I quit” like Charlo Greene, ex-news reporter and CEO of the Alaska Cannabis Club, did on the CBS affiliate KTVA 11 News broadcast in Anchorage, Alaska this week. She seems to be on to something here.

Many folks are praising her for having the chops to walk offset after delivering a completely NSFW message to local viewers. Others have criticized her for acting unseemingly and reinforcing negative stereotypes about the purported combative nature of black women. Personally, I had to watch a few times just to see the follow-up reporter’s facial expression. She was quite literally dumbfounded.

But, I posit there is another way to slice this conundrum.

Yes, what Greene did was “unprofessional.” She could have written a letter, called a meeting, behaved politely behind closed doors, etc. Let’s remember though that “professionalism” works on a gradient scale favoring well-to-do whites with access to corporate jobs and apprenticeships, business networks via nepotism, financial opportunities, education, and other aspects of the American mainstream meant to reinforce what is socially acceptable.

Instead of conforming to these ideals, Greene chose to leave her post in a way which would draw a great deal of attention to a political issue. This political issue she obviously deemed important enough to abandon her day job. She made a judgment call and decided the opportunity cost of her f-bomb versus her end goal was enough to bear. And, I have to respect that.

I won’t walk through the multitudinous examples of white men and women in media making much bigger spectacles than this. She was by no means violent, angry, aggressive, or dangerous in her exit. Have we seen (much) worse? Sure. That goes without saying. Maybe if she had just been a white guy wanting to make potato salad for almost $60,000, she wouldn’t have had to make as big of a splash on television. But, she doesn’t have that kind of privilege.

The real question is this: how might her behaving respectably truly have improved her final outcome? Rhonda Lee learned the hard way that doing all the right things won’t keep you from losing your job. Shonda Rhimes has even been a victim of stereotyping and  mischaracterization even after behaving “acceptably” to mainstream viewers. Had Greene left quietly, she might have had her reputation in journalism left untarnished but her activism would look just as lukewarm as it did before her very intentional, very public statement. It was her courage to act un-respectably – in public – that presents a very revolutionary gesture of activism.

Like it or not, she has the agency to decide what her activism will look like. She may not care to ever work in new casting again. She made that choice as it is her’s to make. What she did for the Alaska Cannabis Club has already materialized into over $3,000 toward her goal of $5,000 to “end a failed drug policy that has ruined the lives of far too many Americans.” Again, I have got to respect that.

Hopefully, enough respectable Americans will figure out how get past their sanctimonious acrimony towards her “hows” and focus on her “whys.” In the bigger picture, she is making the difference that a lot of unrevolutionary respectable people will never have the wherewithal to even consider.