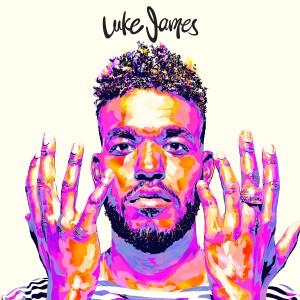 This album as been a long time coming. Luke James’ monster Grammy-nominated single “I Want You” was officially released way back in January of 2012. From then to now, he has gone through a transformation, honing his sound and crafting his image. And finally, on September 23rd, Luke James was unleashed.

I’ll take you track by track to highlight the tracks you should be on the lookout for.

This mini-track serves as an apt introduction to the album. The song sits right in the sweet spot of his lower (and upper) registers. And though the production is a bit busy, the overall sound is cohesive.

His most recent single “Dancing In The Dark” finds James eliciting that trademark falsetto with winning results. A thundering bass drum dominates the instrumentation and makes you want to dance, yet the sleekness of it all is best described as simply sexy.

This would have had an easy five stars, but it just wasn’t long enough. A touch of doo-wop mixed in with a killer beat create something so smooth that it deserves to be full length. And James notably spends the bulk of the interlude spitting lines – instead of crooning – about a woman he saw on the street. Of course she was super fine. And of course it ended poorly. Skip to the next track to get the whole story.

According to this song, pretty girls can be trouble. And as James proclaims on this track, they are most definitely trouble “when you get lost in just loving someone pretty.” But his cautionary tale has a dark edge; he’s clearly speaking from experience. There is a very 90s-esque song structure at work, but the production is textbook contemporary. This is “windows down, blow your speakers out” music.

When this song starts, it has that type of sound that makes you think Kanye is about to start growling all over it. But once it breaks into the chorus, the classical piano backing transforms the song into something else entirely. And it is so gorgeous, you’ll wish it never returned to its more tribal beginnings.

“Glass House” embodies the mellow vibe that is present all over the album, but there just isn’t much else to the song. The refrain, “Throwing rocks in a glass house, like it ain’t gon’ break” rests on an age-old saying, and James’ delicate falsetto throughout is lacking highs and lows. Maybe it was planned restraint, but the song just never pops out of its doldrums.

As awe-inspiring as “I Want You” is, “Exit Wounds” is the clear masterpiece of the album. There is that same duality in production James has relies on for many of his songs, jumping from sparse piano backing to more modern elements, but here each is utilized with a deft hand. Just look at how beautifully James captures the sentiment of residual pain from a breakup.

“This ain’t a heart; it’s just an exit wound that just won’t close.

My brain is scarred; each time I let you through you left a hole.

Stole my smile and all that I’ve got left from you is these exit wounds.”

Add his poignant vocal inflections, sometimes heart-wrenching and other times flippant, and you’ve got an instant classic.

“TimeX” is everything an interlude is supposed to be; it transitions the mood of the album without taking away from the two juggernaut tracks on either side of it. There is a Southern underbelly with its layered acapella backing and harmonica, and put all together, it sounds like he flipped Cyndi Lauper’s “Time After Time.” Ambitious indeed, and still the sincerity in James’ voice breaks through.

I already reviewed this track back in July when it was released as a single, and Luke James’ ability to handle such heavy subject matter without being overtly depressing is truly a gift. But the real miracle here is that he makes Rick Ross digestible.

“Insane” is much more spacy than the rest of this body of work, sounding like something Kevin Michael might put out. It is a  nice change of  pace from the more “urban” stuff, but this isn’t really in his wheelhouse. It would suit another artist much better.

The interlude follows the same vein as “Insane,” leaving space for the instrumental to play as his voice echoes into nothingness. Nice, just not necessary.

This song will never get old, and nobody else should ever attempt it. Luke James owns it part and parcel. It has the soul of R&B pillars like Marvin Gaye and Boyz II Men, and the GRAMMY-nominated song proves Luke James stands as a major contender for the R&B crown.

This 80’s inspired dance track is just what you’d expect a Prince protegé would put together. And as much merit as this song has, only Prince can be Prince. That is where “Expose” falls short. He’s got the high notes fully mastered, but the mystique and funk that Prince brings to his work is conspicuously absent.

“Make Love To Me,” another of his earlier singles, is a perfect showcase for his soaring vocals. This time, it’s the laid-backness of everything that puts James right in the pocket of the song. And the snaps evoke images of a jazz club or speak easy.

This is identical to the original version of the song except that Rick Ross is absent. Instead, James provides a choral bridge that would make Brandy proud. I saw it’s an upgrade.

Luke James puts his own twist on the ever-popular Sam Smith record “Stay With Me”. I really think that this was ill-advised as I have yet to hear anyone sing this better than Sam Smith did, but James does more than enough to make the song his own. He’s simulated the voices of monks as his backing track. There is a bit more Motown moan than Sam Smith is able to produce. And there’s no one else in the game that can please like Luke James.

After a long wait, Luke James has made it all worth  it with his self-titled debut album. As a body of work, it is incredibly cohesive, seamlessly moving from start to finish with minimal missteps. Another of his popular earlier releases, “I.O.U.”, is sadly absent from the album. This was probably a good decision as its tone is decidedly different from what he has presented, but making is a bonus track could have been a nice touch.

Love him or hate him, Luke James is innovating like no other singer on the market. He is stepping on the shoulders of those that have come before him, but making a sound and a style that is uniquely his. Moves like that are admirable in a marketplace filled with copycats (for months, I literally thought August Alsina was Chris Brown), and these risk takers are the ones we should honor with our dollars.

Have you bought the album yet? Share your feedback in the comments section below!