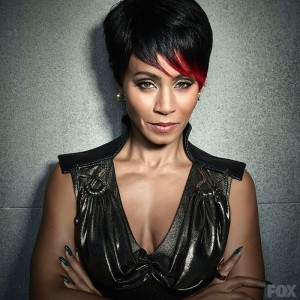 I genuinely had incredibly low expectations for Gotham. It’s pretty well documented that I am more #TeamMarvel than #TeamDC. And an origin story about all of the personalities of the Batman properties sounded like it had all of the nostalgia and none of the bite. Oh how wrong I was.

FOX has managed to put together a show that is immensely interesting and compelling, though it is not without its flaws. The clear bright point of it all is Jada Pinkett Smith‘s performance as villain “Fish Mooney”. She’s got all of the over-the-top goodness of a comic book villain, but she manages to make it not all seem like a joke. Like when she complained about getting her hair frizzy then followed it with straightening her wig (weird but funny). And in a world that is attempting to be grounded, she makes it all possible.

So many future Gotham City personalities were heavy-handedly shoe-horned into the pilot and it was a major detraction (do we need “blink and you miss it” introductions to future Catwoman, Riddler, and Poison Ivy? probably not), and I fear that this series may aim to do too much too fast for no reason. The premise is already interesting enough, and focusing on 2-3 main plotlines is more than substantial for carrying the season.

In addition, the the main draw of the series is that it will take liberties with standard Batman canon. It doesn’t stand to reason that all of these future major players were circling around each other since their childhoods, but it is a unique twist on the overwrought Batman series. So if you have the license to take these liberties, why not make changes to things that didn’t make sense in the first place? For example, why would the Waynes, the richest family in the city, stroll through a dark alley after a movie? Dive deeper into that. Make their presence there have real meaning. Don’t just reshoot the scene because that is how it has always been done.

Going forward, there are some interesting places for the show to explore. We already have a pretty major introduction to The Penguin and why he became the legendary villain from the comics. Ben McKenzie’s Detective Gordon is as straight-laced as cops can come, but he is far from the Commissioner he will become. How will his dynamic with his partner and with mob boss Falcone influence him? Just what type of “understanding” did Falcone have with Gordon’s father, a previous D.A.? One of the female police officers knows Gordon’s fiancée Barbara personally, maybe they were previously in an intimate relationship. Read that innuendo whichever way you like. And if real-world police departments pay salaries big enough to afford condos as nice as the one they share, I must be in the wrong line of work.

Most importantly, Det. Gordon has made it his mission to solve the mystery of who killed the Waynes, but if the comics are to be followed, that murder will never be solved. Is that completely accurate or has the answer been kept hidden for a reason? Either way, just the pursuit of truth in a world rife with corrupt cops, ambitious mobsters, and budding supervillians is bound to be taxing to the very green Gordon.

Ben McKenzie and Jada Pinkett-Smith give powerhouse performances, and the show has so many unexplored corners of Gotham to delve into that it shouldn’t get boring anytime soon. The show already seems a bit heavy-handed with the easter eggs (save something for season two), but this series is so unique in that we only have a general framework of where the players will end up; Gotham gets to color between the lines.

You can catch new episodes of Gotham Mondays at 8/7c on FOX.

If you missed the premiere, watch it here, and check out the preview for episode two below:

How would you rate the show? Tell us in the comments section below!