‘How to Get Away With Murder’, Or As I Prefer to Call It, Yasss 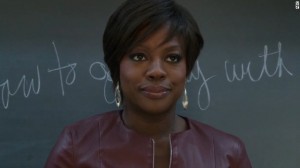 Seeing leading black actresses on television will never get old for me. As such, we have been eagerly anticipating the fall lineup. We can thank Shonda Rhimes and Pete Nowalk for the brand new – guaranteed  – hit drama How to Get Away With Murder which airs on Thursdays on ABC right after Scandal. Watching Viola Davis last night was…fantastic. And, it isn’t for the faint of heart.

Annelise Keating, played by Viola Davis, is a high-powered law professor who teaches Criminal Law 101.  In her class are eager students Michaela Pratt (Aja Naomi King), Wes Gibbons (Alfred Enoch), Connor Walsh (Jack Falahee), Laurel Castillo (Karla Souza), and Asher Millstone (Matt McGorry – a fave from Orange Is the New Black). She immediately begins grooming them for the hellish life of law school. They first competed with one another for an “immunity idol” and a spot on an elite team of students backing up her law firm.

Their first assignment began when Keating walked them through ‘getting away with murder’ using an actual case her firm was litigating which involved a mistress, a wife, and an attempted murder via Aspirin allergy sabotage. She had only three steps for the students to follow:

“We throw so much evidence at the jury that they walk in to the deliberation room with one overwhelming feeling: doubt. That’s how you get away with murder.”

I have a feeling that line will become functionally important to the remainder of the show. As we watch the students screw one another over (literally and figuratively) for a spot on Keating’s team, some of the ugliest secrets emerge. From cheating to doctoring evidence to hiding a body, pretty much every corrupted action is present on this series debut. The show’s writers proved that they have the freedom to put whatever they want on television and we will lap it right up. In the end, it seems Keating actually does get away with murder. But, we can’t quite be sure – which makes it so yummy to watch.

A particular high point for the show is the very complex character embodied in Annalise Keating. Though we were just introduced to her in the one hour, it is clear that she has many layers left to discover. No, she isn’t June Cleaver. No, she isn’t Carol Brady. She certainly isn’t Olivia Pope. And she isn’t “angry.” She is a brash, villainous character who is also thoughtful and protective. She is a black woman whose dimensionality drives the undercurrent of mystery on the show. She isn’t led by her inability to choose between two men. And, while she certainly has some vulnerabilities, she wields her emotions in ways that actually benefit her law practice rather than present her as a poor broken woman. She is just the product of smart writing. She is simply divine.

Heck. Live tweet this show and DVR it so you can re-watch it all the way up to the next week. I have a strong feeling this week’s breakout opener will be followed by seasons of impeccably twisty turns guaranteed to have us questioning our own eyes. I can’t wait.

You can catch new episodes of How To Get Away With Murder Thursdays at 10/9c on ABC.

Check out the promo for next week’s show below and join us on Twitter @WaterCoolerCon_ for the #HowToGetAwayWithMurder, #HTGAWM, and #DatMurda live tweet each week!