‘Scandal’ is Back, Olivia is ‘Julia’, and Why I am #TeamJake Now 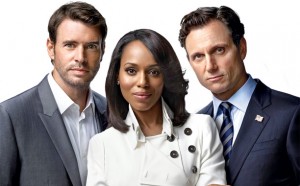 I have been watching ABC and Shonda Rhimes’ hit show Scandal from the very beginning. I lost my way a bit during season three when Mellie was raped by Fitz’ dad because I thought the writers resorted to elementary tactics to drive sex-sationalism on the show. Personally, I am tired of seeing women being battered and abused in popular entertainment. But, I digress. The show came back Thursday night with some expected twists, a funeral, and a few name changes. But, the most shocking thing of the night was Scott Foley, who plays Liv’s steamy lover “Jake,” asserting himself in the best of ways. Yes. I am #TeamJake now.

The show opened with the gorgeous Olivia Pope (Kerry Washington) looking beautiful on a beach. In a weird moment, we find out that she now goes by “Julia Baker.” Awkward. She and Jake had been having a Budweiser commercial of a getaway for months to escape the turmoil back in DC. They are so secluded their tampons and wine have to be delivered via carrier pigeon (actually by boat but you get the point – they were out in the boonies). Then, Liv got mail. Hence, the episode started.

The entire episode is a whirlwind. Huck changed jobs to become a cellular phone repair man. Abby combed her hair and got a personal stylist who transformed her into the tall, pale version of Olivia Pope (she tried it!). And Quinn started…wait nothing. She is still on the show and it is annoying. Like we all expected, Harrison died, and was buried with a closed casket. In other words, Shonda wasn’t playing.

Perhaps the most significant part of the evening watch was the assertive (and sexy) role Jake played in the ongoing saga between Olivia and her day job, friends, and personal demons. He was caring, attentive, gorgeous, available, and tender to Liv even when she was clearly so affected by her personal circumstances that she barely saw him standing in front of her. Jake even had a moment where he dogged out Fitz’ err umm “skills.” So, there was that too.

I am Team Jake now because he literally attended a funeral for a guy who hated him, with guests who want him dead, and embraced Liv even while Daddy Pope looked on so that he could be there for his boo. Jake – though he did do that whole spying, surveilling, breaking in, and murdering thing on past seasons – has been consistent with regards to his feelings about Liv. Even when she was unsure about them, he was. I appreciate the way this character has been written and acted. I like where this is going.

Conversely, my favorite moment of the night had nothing to do with him at all. It was in the state building when Fitz and Olivia are in each other’s presence again for the first time in months. They tried the whole “I am not going to look at you” thing. They attempted to avoid one another. But, as they walked within feet of one another, they nearly brushed hands. Their fingers longed for the others’. It was like everyone else had disappeared. And, while they didn’t stop, speak, or even look directly at the other, each of them was emotionally touched by the breeze between them. That … that’s just good stuff right there.

I am so glad the show is back and my Thursdays have meaning again. Amidst the “angry black woman” controversy last week, one would think we’d be distracted a bit. Nope. Not at all. We were all there watching and waiting. We were live tweeting. We were thankful it was Thursday. Shonda did that.

You can catch new episodes of Scandal Thursdays at 9/8c on ABC.

Check out the promo for next week’s show below and join us on Twitter @WaterCoolerCon_ for the #Scandal live tweet each week!

How would you rate the show? Tell us in the comments section below!