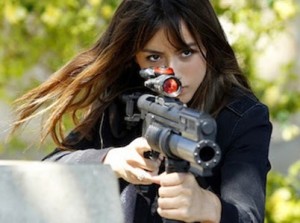 I tried. I really tried. I wanted to like Marvel’s Agents of S.H.I.E.L.D. I gave up last season, but in the wake of Captain America: The Winter Soldier and the heavy criticism of season 1, I just knew they would step their game up for season 2. Alas, there aren’t enough car chases, explosions, or strangely powered villains to right this ship. Therefore, I must part ways with a show that consistently over-promises and under-delivers.

I thought long and hard about why I have so much disdain for Marvel’s Agents of S.H.I.E.L.D. because, on the surface, there are no glaring issues. It follows the same formulas most action shows do. There are pretty people to keep both sexes entertained. Fantastical elements found here are unique to this show. But then I realized this formulaic setup is the show’s primary downfall.

First, everything looks like a set. I realize that in a fictional world where there are superpowered people wreaking havoc every week, there are a lot of liberties you can take with reality. However, At least try to make something realistic. Make me believe that there is at least a chance of this occurring in my world. Second to that, don’t make everything look glossy. It’s bad enough that nothing looks real, but there is no excuse for putting a blanket sheen on the film quality. This is a spy show where the operatives have to get down and dirty to get the job done sometimes. Shouldn’t they look the least bit dirty while doing it?

Second, the lack of realism continues in the stilted dialogue and chemistry-less performances by the cast. Clark Gregg, even with all of his big screen appearances as Agent Coulson, seems to have difficulty with expressing the complexity of the character he portrays. Skye (even with her new “I’m a spy now” bangs) fails at getting anyone to care about her. However, points are due to the duo of Fitz and Simmons whose report almost makes the show watchable and Ming-Na Wen’s nuanced performance as Agent May. That’s where the redeeming qualities end.

Lastly, with all of that being so wrong, the storytelling isn’t even compelling. With the start of each episode, you can predict where it will end. The path the episodes take to get to the end is most usually bland and drawn out to fill the hour. All of the interesting stuff is held for the last five minutes hoping it will hook viewers enough to make them tune in the next week. This type of writing is lazy, and I am bewildered as to why ABC, Marvel, and parent company Disney are standing behind such a poorly put together project.

Sorry to disappoint all of my fellow blerds. Folks have come to me in droves swearing the show had improved. They claimed everything was different after Captain America. Nope. Not at all. The premiere fell completely flat. And, luckily, there are other (better) shows to watch this fall.

How do you feel about Marvel’s Agents of S.H.I.E.L.D.? Tell us in the comments section below!