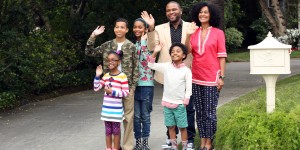 For years, Modern Family has been the reigning comedy sitcom with it’s blunt look at the makeup of modern families, but ABC’s Black-ish is giving it a run for its money.

The premiere episode was packed with so much funny, there is almost no point in me recapping it all here. Anthony Anderson, a comedian I’ve mostly had disdain for, is perfect as the patriarch of a well-to-do black family dealing with living in an upscale white-centric neighborhood. Tracee Ellis Ross plays his “light skinned” physician wife who is clearly more easy going when it comes to race issues. And their quartet of kids keep them on their toes whether the conversation is about President Obama or Bar Mitzvahs.

But perhaps the most striking thing about this show was how much I personally identified with it. As a black man that grew up in an affluent Southern California neighborhood, I can recognize that what is portrayed on the show is not hyperbole for laughs; Black-ish points out the humor in reality. And judging by the massive rating the premiere raked in, maybe some white folks will come to understand how they appear through another lens.

So instead of me trying to highlight each of the hilarious moments from the show, I’ll just post the clips. Click play, and enjoy (you’re welcome).

The Mythical and Majestic Black Family

How Does a Black Guy Say “Good Morning”

Fried-Fried Chicken Is Too Black For You

Do not miss this show. If the premiere is any indication of where this series is headed, it will truly be groundbreaking TV. Black-ish stands to confront very serious racial issues through comedy, making the topics more digestible for all and hopefully fostering understanding across racial lines. The scripting is smart, the performances are true-to-life, and the result is just plain funny. Support the show because, if nothing else, these types of representations of black folk aren’t present anywhere else on television.