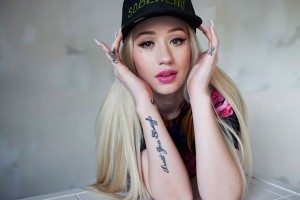 I promised myself I wouldn’t spend an inordinate amount of time writing about Iggy Azalea. But, I had to this time for several reasons. The most important being her symbiosis with a sect of whites (American and abroad) who believe that hijacking, hyperbolizing, profiting from, and perpetuating negative stereotypes of black people is a form of appreciation. Yes, she is a co-opting musician. But, her declaration that she should be allowed to use the racial slur “n*gga” is what makes me truly question her intentions. She – like the two white creators behind the “Thug Kitchen” brand – is profiting off of the continued oppression of black and brown people. So, this really has absolutely nothing to do with appreciation and everything to do with immunity from the effects of racism itself.

Yes, you read correctly. Iggy wants to use the word “n*gga” without catching heat about it. She even went so far as to define the word for all of us because she has been knighted the “Arbiter of the Black Lexicon.” She made her stance pretty clear.

“So you’re allowed to say n*gga because you’re black. Yet I can’t say it?  The word n*gga is different from n*gger.  N*gga is used to describe someone who is arrogant.  Idk why it’s such a problem when white people say it, when black people know d*mn well that a MAJORITY of people saying it aren’t even saying it to be racist because most racist don’t say n*gga.”

We are so lucky to have Iggy otherwise none of us out-of-touch black people would be able to understand the many facets of our own oppression, right?

No. Not right. Iggy’s assertions that the words “n*gga” and “nigger” – both meant to degrade, isolate, and undermine the intelligence, abilities, and worth of black people – have different meaning is sorely flawed. The indignation with which she addresses it is actually quite offensive. Simply, this Australian woman has decided that her whiteness gives her the right to spew racial epithets as long as she means the word as something else…which she defined for herself. Oh, to be young, white, and…white.

Like Iggy, many white entrepreneurs have figured out that underhanded racial bigotry is a lucrative business model. You see, telling other white people their racial biases aren’t racist if they don’t mean it that way helps to perpetuate a system of values predicated on the inherent less-ness of black people. There literally are no other ways to explain it. Many whites – like Paula Deen – write-off this phenomenon to tradition, being raised “that way,” or simple ignorance, but the truth is, once their bigotry is identified, many choose to hold on to it rather than acknowledge its racist premises.

I imagine the white people behind “Thug Kitchen” are in much the same boat. The expletive ridden site describes some of the daintiest, vegan food as “f*cking amazing.” They even use “thug slang” to sell asparagus and cous cous. The Root has referred to this bigotry as blackface. The duo purposely hid their identities from public view knowing full well that once their “thug” antics were exposed as an act, they could become the subject of ire from people whose actual lives become endangered when they are labeled thugs. But, they have a stir-fry recipe to keep you from “f*ck[ing] around with some sorry ass ten dollar take out.” So, that’s pretty thuggish…I guess.

Case and point: Richard Sherman was called a thug after yelling on the sidelines after a football game. At the time, he said it was just another word for “n*gger.” Trayvon Martin, Jordan Davis, and Mike Brown have been referred to as “thugs” posthumously as justification (mostly from whites) for their murders at the hands of white people. The word itself was used to identify these young black men as somehow less valuable to society, and therefore, less deserving of humanity.  Like Iggy, the white creators of Thug Kitchen know this. And we all know that words have meaning in a world where a simple misconception of one’s background and intentions – say, perhaps, while shopping in a Walmart – can result it death.

I offer an alternative justification for Iggy’s word choice and the naming of the completely un-thuggish Thug Kitchen. Quite simply, “thug” is a costume for white people and it’s also a pseudonym for nigger. Maybe Iggy has just gotten a bit more cavalier in her disassociative identity project aka her job. We have seen it time and time and time again. No doubt we will see it again.

Iggy and the Thug Kitchen folks chose these words specifically to wear blackness without having to experience the consequences black and brown folks do when the labels are thrust upon us. It was the notion that I was a thug which got me arrested in high school. What was I actually doing? Picking up a jelly donut for the Assistant Vice Principal during my free period. But, our humanity and lived experiences are never enough for these people. Iggy and the “Thugs” likely don’t give a shit about the broader meaning of their word choice; however, they certainly care about the Cool White People Credits – sometimes mistaken as the white person’s ‘Black Card’ – they get when they use them.

What I won’t do though is pretend Iggy and the Thuggish Ruggish White Bones aren’t contributing to the continued oppression of black people. They don’t get to cherry-pick their bigotry just like we don’t get to cherry-pick our racialized abuse. I will continue to hold them accountable. Maybe if enough of us find their faux blackness intolerable, they’ll have to don a new costume. Maybe ongoing requests that they stop wearing us for clicks and music sales will eventually be heard.