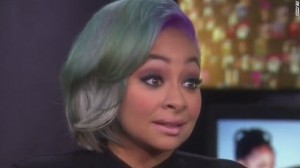 On Sunday’s OWN Where are They Now?, Raven-Symoné had a candid interview with Oprah Winfrey about her sexual and racial identities. After sending out the tweet below, Winfrey asked the young actress if this was her way of saying that she is gay. She denied the label but noted that she has had affections for all sexes since adolescence. 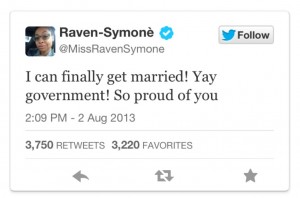 Winfrey recoiled when the starlet said this – knowing it would set off a media frenzy (which it did). Winfrey gave Symoné some time to clarify.

“I’m an American and that’s a colorless person cause we are all people. I have lots of things running through my veins.”

Symoné later exclusively spoke with theGrio.com and said the following:

“I never said I wasn’t black … I want to make that very clear.  I said, I am not African-American.  I never expected my personal beliefs and comments to spark such emotion in people.  I think it is only positive when we can openly discuss race and being labeled in America.”

This is just…just…wrong. Denying ties to the continent of Africa because one is unaware of their country of origin is like denying humanity because one isn’t sure exactly where the first atom exploded. We have enough data and history to know that black Americans didn’t originate in Louisiana. A secondary impact of Symoné’s words is a denial of the significance of the slave trade, self-exclusion from the African Diaspora, and the erasure of Africana heritage in the Americas.

In her attempt to be colorblind or “colorless” – as she put it – Symoné doesn’t shirk unnecessary titles. Instead, she simply ignores the very real, very dangerous conditions associated with those modes of identification and uses her personal agency (as a star and elite) to simply avoid the hassle of having to be ‘African-American.’ Opting out of racial identity when it is convenient is very easy for folks whose daily lives aren’t marred with oppressive corporate structures, isolating public spaces, and ostracizing interpersonal interactions.

The truth is, Symoné is a lesbian (or queer or however she identifies her sexuality in her personal social groups). She is black and African-American. By choosing the label “American” over any of these marginalized ones, she is asserting privilege. And, as an elite whose reach is far wider than many others within her marginalized communities, she is abandoning those groups who face daily struggles when these labels are thrust upon us.

What you see here is the Veil of Respectability. Symoné is simply asking to be human by pretending as if those other labels dehumanize her. Instead of petitioning white mainstream actors who perpetuate violence and hatred toward racial, sexual, and gender minorities, she is simply turning her back on the work which must still be done to make these labels less of a burden for those they are thrust upon.

The real solution for victims of racial, gender, sexual, and other bigoted violence isn’t to simply stop being. We have to keep being in a very public way. We have to destigmatize our existence making a declarative statement about its inherent value. We have to assert the worth in our labels just as white mainstream asserts the worth in its own. We have to stop pretending our “-ness” away. We don’t achieve humanity that way. It will only happen when our humanity is not seen as something wholly different from black or Latino or gay or lesbian or queer or trans or disabled or obese or whatever. We are human. And we shouldn’t have to be “American” first to prove that.