The Riots of Pumpkin Fest 2014 in Black and White 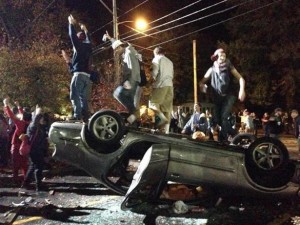 This past weekend in New Hampshire, white college students got drunk, flipped over cars, set bonfires, slid dumpsters down roadways, and demolished areas of Keene – the city where the annual Pumpkin Festival took place. Why? I just told you. They were drunk. What? Not buying it? Not convinced that drunk white people are entitled to random spasms of unhinged, chaotic rage? Well, look in the mirror. See that un-American person there? That’s you.

Yes, I am being facetious. However, I am not making these events up. White people literally tore up a city over pumpkins this weekend, and while over 80 people were arrested, some were tear gassed, and others may be expelled from school, reports out of the area have been extremely generous in their descriptions of the events which transpired. CNN called the riots “unruly” and a “disturbance.”  ABC News went so far as to call it a “melee.” Seems odd given the fact that these publications were among the first to attach the words “looters” and “riots” to the protests in Ferguson, Missouri following the killing of unarmed teen Michael Brown in August. It was ABC who led with the headline describing Brown (an 18-year-old) as a “man” rather than a teen. But, college students burning down Keene are just creating “disturbances.”

However, this isn’t just about Ferguson. Ferguson isn’t the first time black people protested just like Keene isn’t the first time (or last time) white people will act a public fool. Minimizing this conversation into a flat comparison of Ferguson versus Keene is ignorant talk. This conversation is much larger than that. It touches on the nuanced ways we (mis)behave in civil society and the foundational inequalities therein.

In describing the “mayhem” to the Sentinel Source, one student said the following of the Pumpkin Fest Riot.

“It’s (expletive) wicked,” said Steven French, an 18-year-old who was said he was visiting from Haverhill, Mass.

“It’s just like a rush. You’re revolting from the cops,” he said, sometime after 9 p.m. “It’s a blast to do things that you’re not supposed to do.”

Another anonymous student said, “Let’s (expletive) riot.” So, it seems that – not only were the riots attributable to inebriated white college kids’ lack of home training  – they were also a conscious decision on the part of this cohort to do the wrong thing…on purpose. Looking for something “fun” to do, these college students thought fire and brimstone were the best options. Let’s make this crystal clear: these white college students were bored and drunk and all they could think to do was set fire to things and demolish private property. Doesn’t that sound like “thuggish” behavior?

Let’s compare these actions to those in the black community which have been answered with murderous violence.

Pumpkin Fest doesn’t sound nearly as tame as Trayvon Martin‘s walk home from the corner store with iced tea and Skittles when he was killed. Nor does it sound as calm as Jordan Russell Davis‘ musical interests at the time of his murder. It doesn’t strike me as anywhere near comparable to John Crawford who was chatting on a cell phone with a toy gun when cops shot him to death. Heck, Darrien Hunt was killed while running away from cops in a cosplay costume carrying a toy “Katana” sword. He never came close to setting fires, flipping cars, damaging public signs, or…anything. But, the white guys were drunk though so…

This is the tale of two Americas. In one, black and brown bodies are criminalized at birth. Black women are shunned for bearing them then once they are here in the flesh, white America does its level best to beat them to a bloody pulp. In the other America, white college students (the leaders of tomorrow I guess) frequently practice racism, misogyny, deviant behavior, and other non-savory attributes but they get a perpetual pass because of their whiteness. Whiteness is literally a “Get Out of Jail Free” card in this country.

While discussing this on Twitter yesterday, white trolls came out of the proverbial woodwork to castigate my assertions that the 2014 Pumpkin Fest Riots were indicative of white privilege. They claimed that these college students were just being “kids” – you know, like Davis and Martin were. They claimed that these students shouldn’t be held accountable just because they were drunk  (which is basically the entire defense of the “Affluenza” kid). They even went so far as to say that I was “making this racial” because I was mad no one was shot. Somehow, I just wanted a white person to die because – outside of that – everyone at Pumpkin Fest was treated like any other “rioter.”

Yeah. Okay. Except no. They weren’t treated “just like everyone else.” And them surviving the evening isn’t a measure of that fact. Simply, those college students managed to lay waste to a city without a change in the public narrative about the sad state of the white community. Many white folks didn’t even bat an eye at the actions of this wayward few because they, themselves, were completely comfortable in knowing this had absolutely no reflection on their own moralistic character. They were secure, unphased, complacent even. Therein lies the difference.

Every single time a black or brown person is victimized in the US, whites characterize the lot of us as deviant, tinged, violent, and dangerous. Mainstream media plays along. And, in the end, we have an endless loop of anti-black rhetoric both fueling and sustaining the very unfounded notions they began with. This is the epitome of privilege. This is the definition of inequality. The 2014 Pumpkin Fest Riots can only be framed as such. And, no matter how much we like white people, we can’t deny how symbiotic these instances are with their very existence.