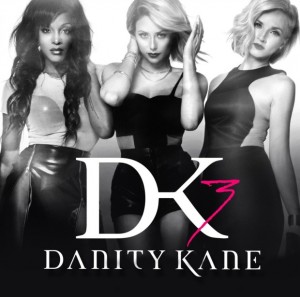 Danity Kane had it all but lost it due to infighting, distrust, and mismanagement. That was 2008. When they reformed (without D. Woods), many thought that the girls had grown up and would be able to transcend the petty stuff. Then there was the “incident” where Dawn allegedly hit Aubrey in the back of the head when she walked in on her and Shannon having a secret meeting without her. Just that quickly Danity Kane fell apart again, this time before the album was even released.

But in reverence to their fans (though more likely for financial and contractual reasons), the group decided to move ahead with the release of their album DK3. The result is a body of work that wears the group’s disharmony on its sleeve.

At the start, there was no recreating the magic that Danity Kane used to be, and believing otherwise was simply delusional. D. Woods and Aundrea are both absent from the group, taking some of the spark and vocal layering of vocals that made then the powerhouses they used to be. What is left are Dawn and Aubrey, the two most prominent names, and Shannon, the girl who pretty much stayed in the background. And that is what they sound like on the record.

The album opener “Rhythm of Love” boasts a refreshing dance vibe that suits all three women perfectly. They pass the reigns to each other naturally, with each voice complementing the other. The song is decidedly short on substance, but this one is all about the sound. One might even be moved to think that the group got its swag back.

The lead single “Lemonade” goes back to the group’s urban roots, and though Dawn is the only “urban” element left in the group, the whole production comes off as cohesive and catchy. The thumping bass and layered vocals are a great contrast, setting them apart from other acts in the market.

“Rage” lives in the vein of quasi-country that Taylor Swift’s music comes from. And in this case, that’s not a bad thing. For one, Shannon Bex is spotlighted more than ever before with a sound that is much more her speed. Also, the song is just fun, from the lyrics about raging at the party like maniacs to their playful vocal antics.

Danity Kane was about feminism before feminism was popular, and “All In A Day’s Work” should have been a reminder to everyone of that fact. DK sings about how they can “do it all” by making meals and closing deals. As a staple on the group’s tour that preceded the album, fans had high expectations from the fiery live performances the group served. However, the recorded version loses some of the stank that had fans were so hyped about. The electric guitar pushes a strong rock edge, but the bass is oddly flat on a song that rests on the bombasticness of the production. Their voices blend a bit too well to the point where we get none of the uniqueness they each bring to the table.

The acoustic “Two Sides,” impeccably written by group member Dawn Richard, is another missed opportunity. What could have been a standout ballad falls flat due to a noticeable empty harmony. Somehow, their voices are not enough to create a full bodies harmony, and the production comes off as half-baked.

Similarly, “Secret Lover” feels more like a battle for group leadership than the work of a unified trio. First, the production harkens back tot he group’s first album Danity Kane, when the muscle behind them had much more control over their direction than they did. At the same time, there is that same discord found in their harmonies that completely distracts from being able to enjoy the music.

“Roulette” comes together as a bad 80’s retread, a fruitless attempt to capture the current retro trend in music. Equally as disappointing, this is another track with virtually no substance. As women in their 30’s, you’d expect them to have something more substantial to say in their music. Instead, it appears that they have been relegated to pandering to the vapid musical tastes of today’s youth.

For a group’s return that was so hyped and celebrated by fans, DK3 doesn’t have much to offer. The whole group couldn’t make the party, no video treatments were released for any of the songs, and they couldn’t even keep the ship afloat through the album release date. Their sound has evolved – necessarily – and they deserve credit for pushing themselves. It would have been very easy to just try to replicate what they did before, but they didn’t take the easy route. Unfortunately, the group just doesn’t work as a trio. As much as I hate to say it, Diddy knew what he was doing when he put the five women together. Listening to them now, one can’t help but feel cheated.

Are you feeling DK3? Tell us in the comments section below!