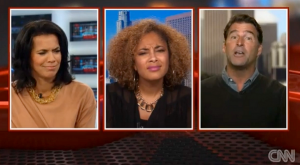 White men are the experts on everything especially knowing what it means to be a woman and victim of street harassment. Surprised?

It’s moments like these when you have to honestly wonder why some people won’t – in my church lady voice – just “SADDDOWN!” This is especially confounding when those people are a) male, b) white, and c) completely unaware of the lived experiences women of color endure facing unwanted, unprovoked, often violent street harassment.

When comedienne Amanda Seales sat down on the panel at the CNN Newsroom on Sunday with host Fredricka Whitfield and panel dudebro Steve Santagati, I’m sure she wasn’t planning on debating the merits of street harassment with an indignant, anti-woman, machismo “dating expert.” But, that’s what she got anyway.

They were debating the contents of a viral video, by anti-street harassment group Hollaback, showing a young white woman walking the streets of New York for hours. In the video, she was catcalled hundreds of times. Sadly, the video was later found to have edited out the white men who also catcalled the actress in the scene. But, many have argued that the video still makes its point.

Several things are disturbing about the video itself and the reaction from Santagati.

First, the fact that the video clearly pictures a white woman being harassed by black and brown men works to send a specific signal regarding the racialized perspectives of criminality, deviance, and misogyny in this US.This is an age-old propaganda tool used by white supremacists seeking to paint black and brown people as uncivilized, depraved, and inherently less capable of human function than whites.

It was the post-Reconstruction, pro-Confederacy film Birth of a Nation (1915) which pictured a poor, frail white woman jumping from a cliff to her death to escape the hyper-sexed, rape-inclined black man (a white man in black face). And, in 2013, the iconic mag The New Yorker was busy praising the movie claiming what is so bad about it is “how good it is.” Frankly, white people – especially white men – still approve this message. So, I can’t say I am surprised about the video’s poor but very deliberate editing.

Next, what probably disturbed me the most about Santagati’s reaction was his claim to know more about street harassment than women themselves. When Seales flat out told him, “You are not an expert on this my brotha’ because you are not a woman walking in the street.” He answered with this.

“No, no, but I am more of an expert than you and I will tell you why. Cause I’m a guy and I know how we think more than you guys will ever know.” 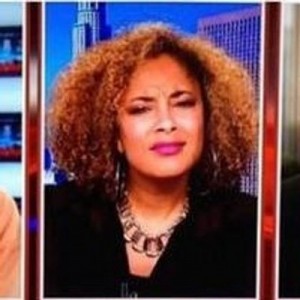 That’s when Seales and every other woman listening made this face.

White people stay claiming that they are no monolith. They don’t want to be characterized and generalized as if they are all the same. But, simultaneously, they don’t want nonwhite people to claim any knowledge of racism, sexism, misogyny, or anything else because they and they alone understand each other. They know why whites often treat others with contempt or indignity through the lens of privilege so we aren’t allowed to discuss how we feel about it.

This is a silencing technique. Telling black women – and other people of color – they just don’t understand racism, sexism, and misogyny because they aren’t white men implies you’ve got a monopoly on the franchise of interracial interpersonal relations in the US.

It’s arguments like these that require we speak up and hold folks accountable for their BS. White men don’t have a right to condescend to cis or trans women (of any race) about misogyny nor do they rank above us in the ability to thoughtfully analyze how it affects our daily lives.

Lastly, Santagati ended his argument by suggesting that women just buy guns to defend ourselves. That, and we should just start verbally assaulting the street harassers back to “stand up for [our]selves.” Seales mentioned that a young woman, 27-year-old Mary Spears, was murdered for rebuffing a man’s advances. So, not only is Santagati’s view uninformed, it’s dangerous.

Instead of placing the onus and burden with men, he’d rather tell women to change the way we deal with obnoxious, violent sex addicts and misogynists on the streets who demand we perform for them whenever they happen upon us walking. Nevermind the threats to personal agency and safety.

I tellya, this is the problem with race and gender relations in the US. Heck, this is the problem with most policy-making too. We – as a collective- hate to identify the problems and address them at their sources. Instead of making men responsible for sexism, it’s women’s faults for being pretty and outside at the same time. Instead of blaming white racists for racism, it’s young black people’s faults for looking scary all the time. Instead of holding corporations responsible for mistreating and underpaying employees, it’s the workers’ faults for not having a better job. The list goes on and it is sickening.

These derailment and deterrent tactics will exist as long as white men exist. We can’t make them go away. But, we can certainly call them out and throw them the side eye whenever they emerge.

Personally, I am here for Seales’ reactions. Santagati’s prototypical, canned white dude responses are archaic, out-of-touch, and violent to women. Sadly, most men won’t see them that way. But, that shouldn’t stop us from publicly identifying his stance as the trash it is.