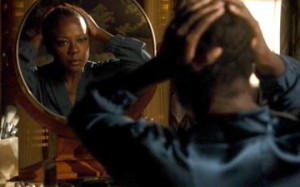 “Is she just gonna go to sleep without her hair wrapped?”

That’s the question I have asked every television and movie screen for as long as I can remember. As a black woman who has worn every hairstyle under the sun, seeing these glamorized black women with full faces of makeup and perfectly tapered and coiffed wigs and weaves laying down on cotton pillowcases without a satin bonnet at bedtime is sacrilegious to say the least.

But, actress Viola Davis rebuked that mainstreamed, whitening of black women in film and TV when, a few weeks ago, she demanded her character, Annalise Keating from “How to Get Away With Murder“, remove not only her face of makeup and eyelash extensions but also her iconic wig in a dramatic scene when she prepared to turn in for the night. Beyond the scene giving me all of my life, it represents a revolutionary and critical departure for black women in visual media whilst celebrating the diversity of black women’s lived experiences.

If you haven’t seen the fourth episode of HTGAWM, it is the final scene which has been making waves since it aired.

In her recent interview with Ellen Degeneres, Davis explained that she urged writers to include the makeup and wig removal scene to represent women who often go unrecognized on-screen.

“A whole portion of women out there are marginalized. I want to be a real woman. Let’s go for it. I’m a character actress. Okay.”

She is most certainly correct. Many women of color are erased via popular mainstream whitening. Black women are especially vulnerable to this given the very limited opportunities for prominent roles in film and television. Davis knows the industry well enough to understand how something as simple as her character keeping her wig on in the bedroom could be complicit in subverting the real cultural experiences for diverse groups of women. The fact that she had the integrity and audacity to do something about it is laudable.

Perhaps the most promising thing about her tenacity in keeping this scene authentic is its reach. Shonda Rhimes has single-handedly redefined television. Her shows reach global audiences. Davis’ revolutionary act of being a beautiful bare black woman in public sends the message that black skin is viable, important, accomplished, and perfect just as it is. Not only that, it was the complex vulnerability she illustrated that flew in the face of the limiting stereotypes of black women’s bodies.

Amidst the controversies nowadays over skin lightening, eye color changes, and other body modifications, this is a powerful proclamation. It’s one I am proud to have witnessed. Ms. Davis certainly represents a new direction for black women in the business. Hopefully, where she is travelling, others will gladly follow.